Last night we decided to Eat Up Downtown and went to River City Brewing Co. If you are not familiar with the promotion, it is certain restaurants downtown that are offering a $25.00 three course special menu.
Our waiter brought out our drinks and dropped off some rolls with butter. There were plain rolls and ones with seeds on the top. They were firm on the outside and soft on the inside. Very good. 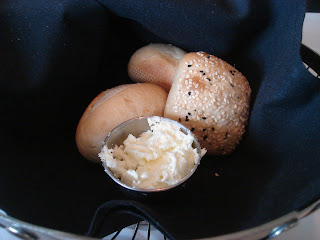 We started our meal off with the "starters" option. I got the soup of the evening, which was a turkey and rice soup. The soup was served with a package of oyster crackers (which made me highly excited, I love those things!) and was really good. There were large chunks of turkey and enough rice to get a spoonful every time. The soup had a broth base and I was in such a rush to eat it that I burnt my tongue! 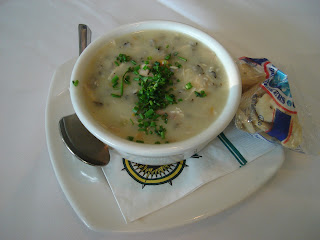 Ivan decided on the caeser salad. It was good, but he couldn't really describe it for me. Here are his words: "What can you really say about a caesar salad?" That made me laugh :) 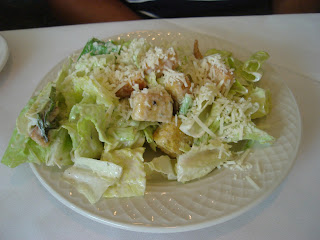 Next up was the entree selection. I got the Grilled Marinated Flank Steak-Merlot Mushroom Sauce, Crisp Fried Onions, Roasted Garlic. While I definitely tasted the Merlot Mushroom Sauce, I didn't really get a lot of garlic in it. I am not sad because the steak was absolutely delicious! There were at least 6 large steak pieces and I had to take some home (which does not happen to me!)
I am usually an onion hater, but I like onion straws. The ones on the steak were a nice addition but it was hard to eat them with the fork. Normally I would just pick them up with my hands, but I didn't feel right doing that in a fancy restaurant! The steak came with a three-cheese mashed potatoes and that was also very good. I didn't taste too much of the cheese, but that is better than it being overpowering. I also have to mention that there were some string beans on the plate. I have no idea how they were because they fall into the "yucky" veggies category for me. 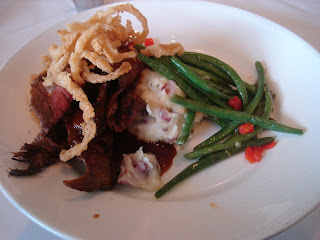 Ivan wanted to get the steak, but he is a mushroom hater so he went for the
RCBC Key Lime Scampi-Local Shrimp, Garlic, Chardonnay, Linguine & Herb Cheese. His portion was also massive and I was wondering how we were going to eat the dessert! The pasta was really good, but he would have liked a little more sauce in the pasta. I kept seeing him eyeball my steak, so I knew he had a little bit of plate envy. 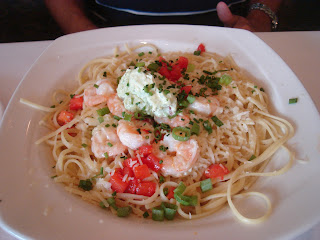 For dessert, I got the Chocolate Mousse. It came served in a champagne flute topped with whipped cream and a Pirouette cookie on top. Once you got through the whipped cream layer, there was another layer that I couldn't quite put my finger on. Maybe it was a vanilla mousse? Under that was the chocolate mousse. I hate to say it, but that second layer was wayyy better than the chocolate layer. I don't know what it was but it was gooood! 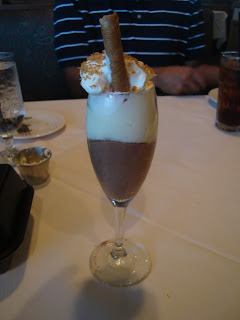 Ivan got the Key Lime Pie. His pie had garnishments of blackberries, blueberries, strawberries, a Pirouette cookie, whipped cream, and a raspberry drizzle across the top. He was very pleased with the pie and left wanting another piece. 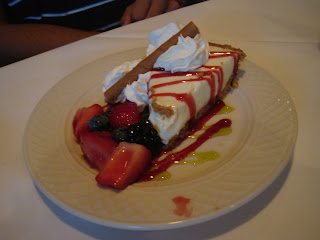 Overall we had a great experience and are pretty sure that we will visit again in the near future!