Tijuana Flats was offering Firefighters, Police, and Military 50% off on Sunday, so we decided to go there. We went to the one in Baymeadows fully anticipating it being packed (like usual.) We were pleasantly surprised when there were only a few people there. We walked right up, placed our order, and went to find a seat. One of the managers brought our food out and had an extra side of salsa on the tray. He asked if we wanted it and then noticed that we didn't have any chips. He graciously went back to the kitchen and brought us an entire order of chips!! I have a sneaking suspicion that he did that because Ivan is a firefighter and it was 9/11 :) Either way, it was such a nice gesture and we really appreciated it! 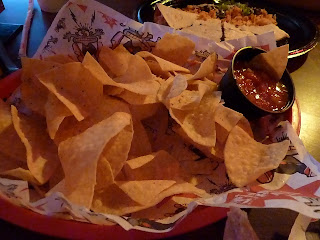 I got the Chicken Flautas with a side of queso and black beans and rice. One thing I really like about Tijuana Flats is that you have an option to get a wheat tortilla and "power light" your meal with low fat cheese and/or sour cream. I got my meal this way and you can't tell the difference, it still tastes great. My flautas were hot and crispy with cheese/sauce oozing out. They add a red/tomato type sauce in all of their entrees, and I think it really sets them apart from every other Mexican/Tex Mex place. I dipped them in the queso and it was like heaven! The black beans were great when I put them on top of the rice. I like it when the beans have sauce in there; they aren't just beans on a plate. 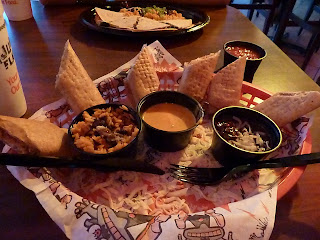 Ivan got the Beef Quesadilla with black beans and rice. He also got his quesadilla with a wheat tortilla and "power light" and he agreed that you couldn't tell the difference. The quesadilla was filled with beef, onions, lettuce, tomato, sour cream, cheese, and olives (you can also get jalapenos if you are feeling spicy.) It is not massive, but you still leave feeling satisfied after eating it. 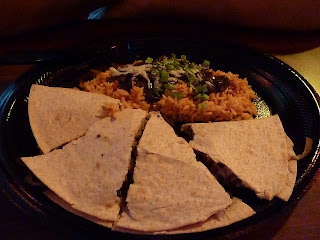 Whenever we visit Tijuana Flats, we have to order the Churros. I have had an obsession with Churros ever since BJ's used to sell them in the freezer section and then all of a sudden decided to stop. I was devistated! After a good 15 years, they showed up at Tijuana Flats and I almost fainted! The order comes with 6 churros, which is great because I will kill over the last of anything, so you can imagine what I would do with a churro. Even though they always give you 6, it doesn't stop Ivan from thinking that I ate one of his (every time!) because one is laying on top of the last one ;) The churros come dusted with cinnamon sugar and powdered sugar. If you have never had one, you are missing out! 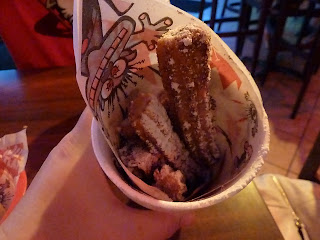