My in-laws are in town so we all went out to dinner last night. Ivan's brother lives out by the airport, so we went out to Logan's Roadhouse in the River City Marketplace. For starters, this place was packed so we had to wait a little while for a seat (which is fine). Once a table opened up, we were seated at a large booth. When the waitress came by, she realized that we were really crammed in (there were 7 of us) and offered us a different table at the bar that just opened up. That was really nice of her and was greatly appreciated by us. Once we were settled in, out came the peanuts and the bread. This place is a "throw your peanuts on the floor" kind of place, which you figure out the second you walk through the door! My OCD would not let me get near the communal peanut bucket, so I skipped the peanuts and decided to gorge on the hot rolls that were in front of me. The rolls were soft and melt in your mouth. Yum! 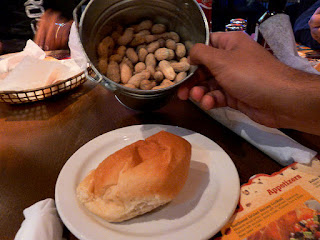 I was torn between the Teryaki Chicken and the Santa Fe Tilapia. I ended up with the tilapia and I knew I made the right decision. For starters, the portion was huge! There had to have been at least 2-3 tilapia pieces on the plate. They were seasoned with a spicy rub, topped with a Roasted Corn & Black Bean Salsa & a cilantro-chipotle sauce. Let me tell you, that sauce was insane! It had just the right amount of spice to leave your lips tingling, but not enough to clear your sinuses out! The tilapia was cooked perfectly and the corn/black bean salsa was a nice addition that went well with the fish.
My 2 sides were Rice Pilaf and Macaroni and Cheese. The rice was on the bland side, which didn't really bother me because I was mixing in the cilantro-chipotle sauce to give it more flavor (I would put that sauce on anything!) The macaroni was really good. It was more of a creamy macaroni with a lot of cheese sauce, just the way I like it. 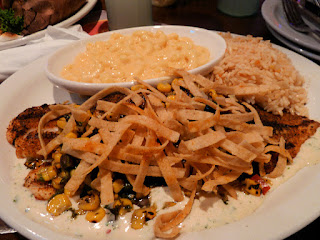 Ivan got the ﻿New York Strip 11-ounce steak with fries and a baked potato. He said that the steak was good, but it had a lot of fatty pieces around the outside. The fries and baked potato were also good but they were standard steakhouse fare, nothing special. 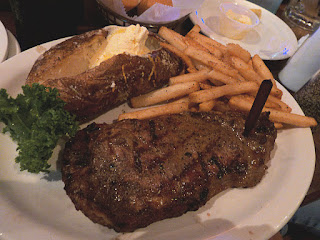 Verdict: We liked it
I really liked my Tilapia and Ivan was really jealous when I let him take a bite. This amused me because it's usually me that has the food envy! The prices are a little higher than they should be, but my meal was a good value due to the portion size alone. If you are looking for a steahouse and are tired of the usual, I would give it a shot!