After a few recommendations (and a Daily Deal coupon) we decided to try Speckled Hen Tavern and Grille. We decided on a Sunday lunch and checked the website for the menu. When we got there, we were surprised to learn that the menu online was different than the one at the restaurant. To be fair, there were only a few changes, but one of them was what Ivan was going to get! It all worked out for him because the item offered was way better than what was shown online :)
I was a little torn between 2 items, the Shrimp and Grits and the Mac n' Cheese. I never made up my mind so I got both! It was a good thing I did because the portion sizes are really small. This is a biggie for me. I don't mind paying for food, but give me enough to eat! The shrimp and grits were very good but I wish there were a little more grits. The shrimp were rather large and served on a rosemary skewer, which gave them a nice flavor. There was also a few andouille sausage pieces on the plate and they were amazing! I usually do not eat sausage by itself, but I made an exception for these! 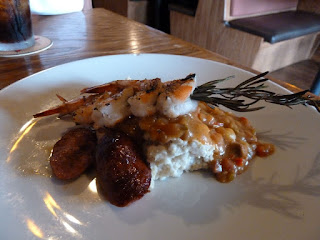 Next up was the Mac n' Cheese. It was baked and had a breadcrumb topping, which I love. The description of the macaroni says that it has cheddar cheese, but I am pretty sure I tasted some Parmigiano-Reggiano in there too. The dish had just the right amount of cheese and I would love to try the other varieties that are offered, especially the Rock Shrimp one! 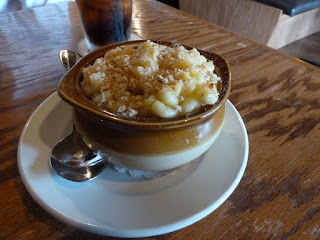 Ivan ended up with a Crabcake Burger, and once again I really wanted it. I didn't want to order the same thing so I stayed strong and stuck with my original selection. The burger came with coleslaw and chips and looked absolutely delicious. Of course I was never offered a bite, so I have to take Ivan's word when he said that it was as good as it looked (yes I am still bitter!) 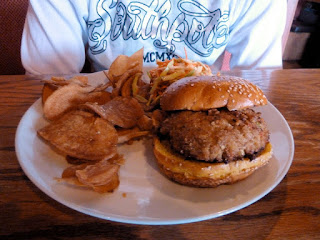 Even though we liked the food, the prices were really high for the value received. Like I said previously, I don't mind paying for food, but I need more of it! Ivan's crabcake burger was a good value, but my shrimp and grits should have been priced at least $2-$4 cheaper than it was. Also, the Mac n' Cheese should have been priced $2 cheaper (it was more of a side dish than a meal.)
On a positive note, our server was really attentive and friendly. She made our visit more enjoyable :)