Ever since M Shack opened at the beach, I have been dying to try it. I like to give new places a few months to get the kinks out and let the crowds die down, but I broke down and went last weekend. For starters, the place is really nice looking. The inside has a modern feel and even has a small bar! When you walk in, the menu is written on the wall and you order at the register. Another cool thing is that the kitchen is directly behind the register, so you can see everything. To me, that shows they have nothing to hide.

Since Times Grill closed last year, I have been craving a good burger with an egg on the top, so I was thrilled to see that they had one! I got the Sunrise Burger with Parmesan Truffle Fries. The burger was thick and juicy and was cooked medium (they didn't ask how I wanted it, which I thought was odd). The egg yolk broke as soon as I flipped the bun over, so it was pretty messy (this always happens, so it wasn't an issue). I pretty much dipped the burger in the yolk from there on out. I know that sounds gross, but don't judge unless you've tried it!
The fries were a bit of a splurge, but I think they were worth every penny. Every fry was covered in cheese and you could really taste the flavor in every bite. After getting these, I don't think I can get the plain fries the next time we go! They were that good! 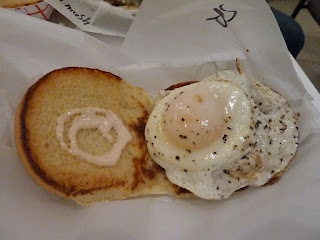 Ivan got the Italian Sausage Burger (minus the mushrooms) with fries. He has never had a sausage burger, so it was intriguing enough to get :) The burger was very moist and flavorful and the onions/peppers were cooked perfectly. The bun was a more sturdy artisian type that really complimented the burger. Ivan says that "it was easy to bite through and was very smooth". 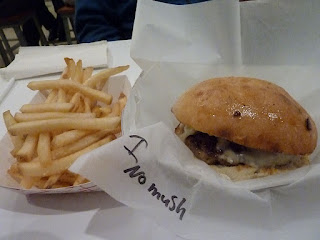 Overall, M Shack was a hit. The prices are right and the food was remarkable. They call themselves a gourmet burger place, and I would have to agree 100%. They also had really fast service. We had our food within 5 minutes and the place was packed (we literally got the last table.) If you are at the beach and looking for a great burger that's not too expensive, M Shack is the place!