While perusing Urbanspoon one day, I came across Green Papaya. It had good reviews so I put it on my to-do list. Last week it was featured on Groupon, so I knew it was fate and I had to buy it! This week was Ivan's B-day (the big 3-0!), so we had a BOGO coupon for Cold Stone. Since we were already headed out that way, we decided to check out Green Papaya. From the moment we walked in, we were blown away by the decor. Everything is modern and beautiful! We were taken to our table and the server pulled our chairs out for us. WOW, that is great service! We actually had 2 servers helping us and they were both very attentive and friendly. It was the best service we have had in a while!

I ordered the Chicken Pad Thai (minus the bean sprouts). I always worry about Thai places because most of the time they give you small portions. When our food came out, we were very pleased to see that the portion was perfect. The dish had a lot of flavor and I had tons of chicken mixed in with my noodles. There were crushed peanuts on one corner of the plate, and I sprinkled them all over the top.
This was by far the best Chicken Pad Thai I have ever had! 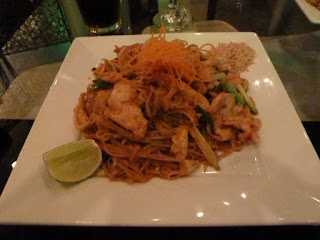 Ivan got the Thai Special Fried Rice (which includes chicken, pork, and jumbo shrimp with egg, peas, carrot and scallions). He was very pleased with his choice as well. He said that it tasted great and his portion was also perfect. He had lots of meat and talked about it for the rest of the night, so I knew that he loved it! 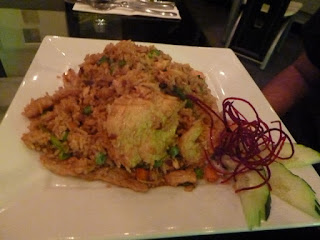 Verdict-Loved it! Ivan and I both agreed that we will be back soon. Funny story...the waitress commented about me not liking bean sprouts and said that I didn't get them last time either. I told her it was our first time there and she thought we were messing with her. She swore that we came in and got the same thing, so apparently we both have doppelgangers that are dating/married and eat the same foods as we do!
We are in the Twilight Zone!!! Do do, do do, do do, do do