Last night we were treated to a fantastic dinner courtesy of Taverna Yamas and the Folio Weekly Bite Club! We met up at Taverna Yamas and were offered a complimentary beverage (of the adult variety) and mingled a bit. We all sat down and listened to some info about the restaurant and their food and they brought us some white and red wine to sample. Soon after, the bellydancer came out! When we first walked in, we were wondering why there was paper all over the ceiling, well quickly figured it out. When the music comes on, the bellydancer comes out and napkins get thrown in the air! Let me tell you, this place is party central! 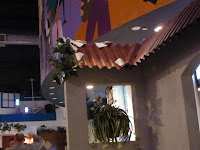 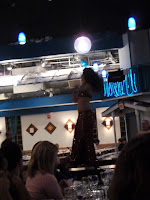 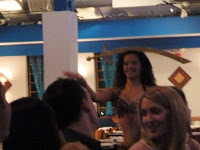 Our first family style course was Cold Pikilia, which consisted of Pita bread, Hummus, Taramosalata (caviar spread), Melitzanoalata (eggplant spread), Tzatziki (Greek yogurt spread), and Dolmades (grape leaves stuffed with rice). ﻿I normally do not eat anything out of the ordinary. My mind gets in the way and won't let me enjoy it. Well little did I know, that I was eating a caviar spread! The funny part, it was the best thing on the plate! This was also my first time trying grape leaves, and I liked them too! It's a little odd eating a leaf (I felt like an animal!), but I overpowered my mind on that one. 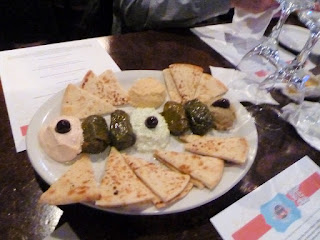 Our next course was salads. We were served the Greek Village Salad, which was fresh ripe tomatoes, cucumbers, onions, peppers, Kalamata olives, feta, olive oil and oregano. I decided to pass on the salad, but everyone else seemed to enjoy it. 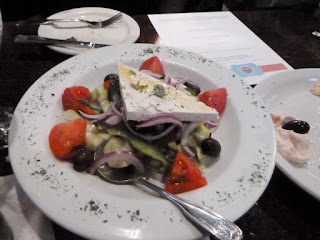 Next up was Hot Pikilia, which consisted of Spanakopita (spinach pie), Keftedes (Greek meatballs), Calamari, and Lamb Ribs. This was a little tricky for me because spinach doesn't like me, I don't like calamari, can't wrap my mind around the lamb, and I didn't know what kind of meat was in the meatballs. So I did the next best thing, had Ivan try everything! The consensus at the table was that the meatballs were the best. This was Ivan's first time trying lamb, and I think he really liked it. He said that it tasted just like a pork rib. He also got into the calamari because he likes that stuff. He kept stabbing at the plate for more, so I guess he liked it pretty well :) 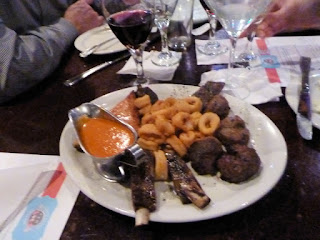 Our next course was a surprise course, and it was awesome!! 3 words....Pan.Seared.Cheese! What could get better than that?! The official name for this is Saganaki. I could go on and on about the cheese, but I am going to try and restrain myself. It was that good. If they had an entire entree of that cheese, I would get it every time. It was so good that I would trade my husband for a lifetime supply...sorry, I said that I wasn't going to talk a lot about it, so here are some pictures to look at instead. 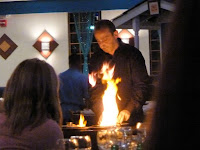 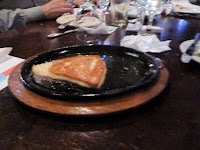 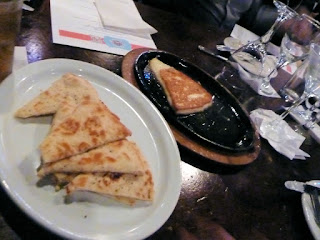 For our Entrees we were served Chicken Kebab, Filet Mignon Kebab, Pork Loin with Spinack Leek Rice and Lemon Potatoes. Everything on the plate was delicious, especially those lemon potatoes. I don't know what they did to them, but they are the best potatoes I have ever put in my mouth! All of the meat options were very good and we were given very large pieces. The pork was a little overcooked, but it still had a great flavor and tasted good. 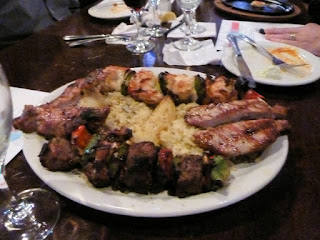 Another surprise course! We were given Pastitsio (layered macaroni, seasoned ground beef topped with creamy béchamel) and Mousaka (layers of potatoes, roasted eggplant and ground beef, topped with
béchamel). This might have been my favorite course. The Italian part of me perks up when pasta is involved! The Pastitsio was like macaroni heaven. The ground beef was mixed in with the pasta and reminded me of a baked ziti. The béchamel was delicious and I was scooping up as much as I could! The Mousaka was basically a Greek lasagna, so once again, I was in love! All of the ingredients went well together and I was very impressed with both dishes. I could see myself visiting again and again just for these 2 dishes (but you know I would also get the cheese!) 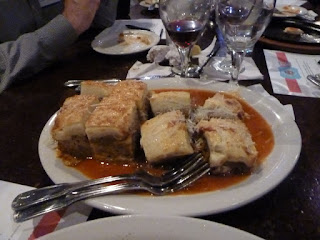 After we were all stuffed, out came dessert! It's a good thing that there is always room for dessert :)
We had Baklava (phyllo dough pastry filled with walnuts, cinnamon, cloves and honey), Galaktoboureko (honey phyllo filled with custard), Ek Mek (“Kataifi” shredded phyllo dough, walnuts, custard crèe and whipped topping.) The Baklava was one of the best in Jacksonville (the other is at Mandaloun). The flavor was amazing and it had just the right amount of walnuts. The Galaktoboureko was also really good. The honey phyllo made it taste a little like a baklava and the custard was more firm than soft. It tasted great and I kept grabbing more off of the plate (in my defense, everyone else looked like they were done!) I didn't love the Ek Mek, but that was more of a personal preference. Ivan loved it. He kept going back for more, even when the night was winding down and we were getting ready to leave! As long as it was in front of him, he was gonna eat it! 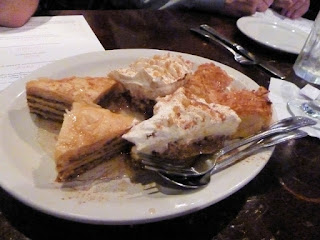 Before we left we were treated to our last surprise of the night...a shot! I didn't hear what was in it, but we drank it anyway. That thing was serious business!
Verdict - Loved it! Taverna Yamas is definitely going to be added into my rotation. Plus, it is literally right around the corner from work, so I can see many lunches in my future!