More and more food trucks have been popping up around my work lately, and this excites me to no end! I grabbed 2 of my lunch buddies and headed over to Driftwood BBQ last week. We actually got there a bit early because no one looked at what time they opened before we left work. I guess we were all eager to get some good BBQ! They actually ended up opening early, so it worked out for us. The first thing that you notice when you pull up is the big smoker on the back of the food truck. This area is separate from the ordering area, and that’s a good thing because it sure is smoky! When you place your order, they go and get it out of the smoker. We really liked this because everything is fresh and hot. 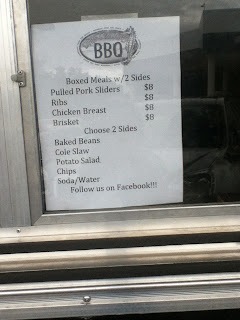 I decided on the Pulled Pork Sliders with Baked Beans and Chips. The meal comes with 2 sliders and they are packed with meat! I had to take some out of the sandwich in order to eat it (I have a small mouth, even though others would disagree with that statement). The buns were very soft, almost like Hawaiian rolls and the meat was perfect. It had a nice smoky taste and was tender from the slow heat. The beans were also very good. I am a bit picky when it comes to beans, but these passed the test. 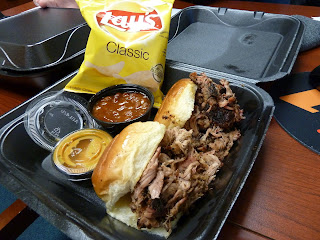 Karen got Chicken with Baked Beans and Potato Salad. She said that the chicken was really juicy, and proceeded to stab it with a fork to show us. She also liked the flavor the rub gave the chicken and said that it didn’t need any sauce on it. Karen also liked the beans and said that the potato salad had smaller potato chunks, which she really liked, and celery that made it crunchy. Also, it was “not too mustardy.” 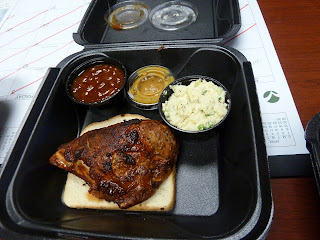 David got the Brisket with Cole Slaw and Baked Beans. He really liked the rub on the meat and said it was super moist. The meal came with a mustard sauce, but the brisket was so good that you didn’t really need the sauce. He would have liked the bark of the meat to be a bit crispier, and would recommend they make a BBQ sauce that was a little spicier. The cole slaw was good, not to dry or runny, and not to sweet. The beans were good and the sauce was nice and thick. In his opinion (and mine) the only thing missing from the beans was left over BBQ meat. It was the perfect portion size for lunch with the meat and 2 sides, he was fat and happy (his words!) 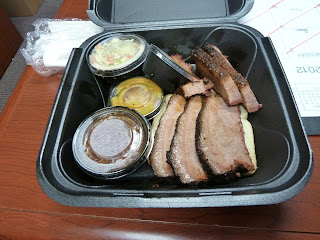 Verdict-Loved it! The food was delicious and the prices were very reasonable. For $8 you can get a boxed meal that consists of your choice of meat and bread, with 2 sides. If you take it back to your office be warned, you can smell the food a mile away. We had a few different coworkers come in Karen’s office to check out what we were eating!