I was recently invited to a blogger dinner at Whiskey Jax hosted by our friends over at Jax Restaurant Reviews. I have been to Whiskey Jax once before but didn't really get a good feel for the food, so I was really excited to go back.

Course 1: "Bold City Beer Cheese Soup- One of my staples in my career has been a number of different soups that I have presented. This Beer Cheese is an "up North" soup with roots in the Midwest. I choose the Bold City Dukes for the rich malty flavor that it lends to the variety of cheeses that accompany it. The garnish of puff corn is something common in the upper midwest,but I challenge you to find anyone in this region who uses it. Gives it a fun factor." - Chef Red 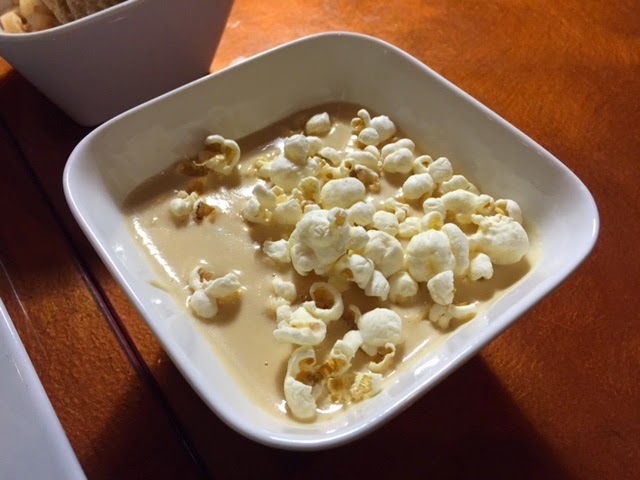 I really liked this soup. I am already a huge fan of beer cheese soup, so I know how hard it is to get it right! Our soup actually had cheese puffs on the top, but the one pictured shows popcorn. I'm good either way!

Course 2: "Seared tuna- Seared Tuna is definitely not a new concept by any means. I feel that the the thing that sets ours apart, is the combination of flavors . Seared with Togarashi( Japanese 7 spice) and paired with a cucumber slaw and wakame salad that we marinate in our whiskey pickle brine. Then finished with an avocado vinaigrette with hints of sesame, wasabi and sriracha chili. Using fresh tuna is also very key to this dish being a standout." - Chef Red 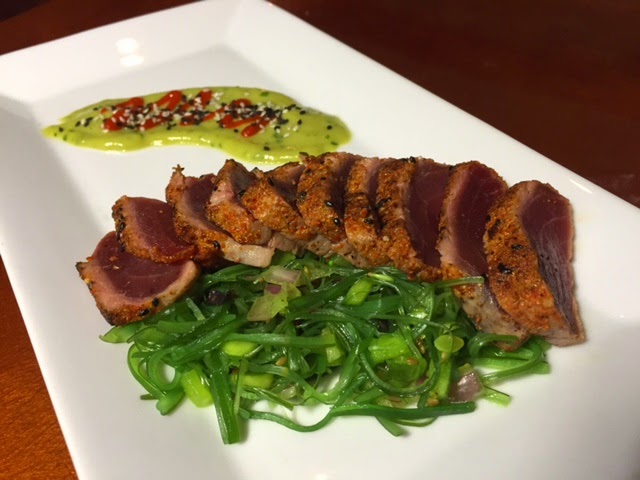 Delicious. The tuna was seasoned very nicely and the sauce on the side was a great pairing.  I also liked the wakame salad that came with it. 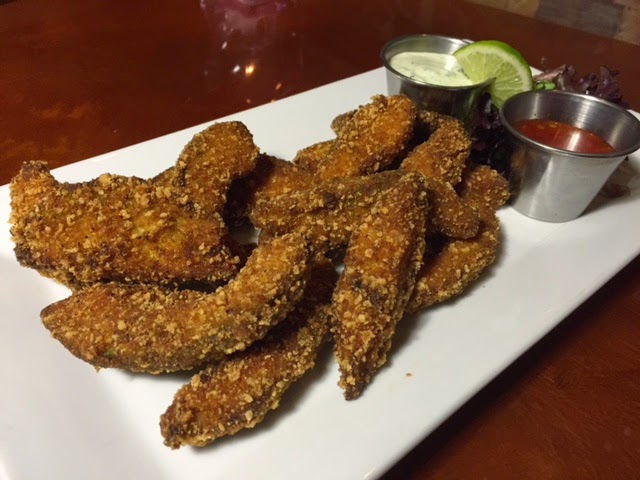 Avocado fries aka THE BEST THING EVER!!! By far my favorite dish of the night. I am definitely going back for these! They are different from anything I have ever had. Even people at the table who don't like avocado were in love with these. I made sure to let Chef Red know he had a winner here!

Course 4: "Truffled Ribeye: Grass fed 14oz Ribeye grilled and topped with house made truffle butter. Paired with a spinach, sundried tomato, and parmesan cheese risotto. I feel the execution of the risotto, the quality of the steak , and the combination of flavor will make this dish a standout as one of the new dishes on our winter menu." - Chef Red 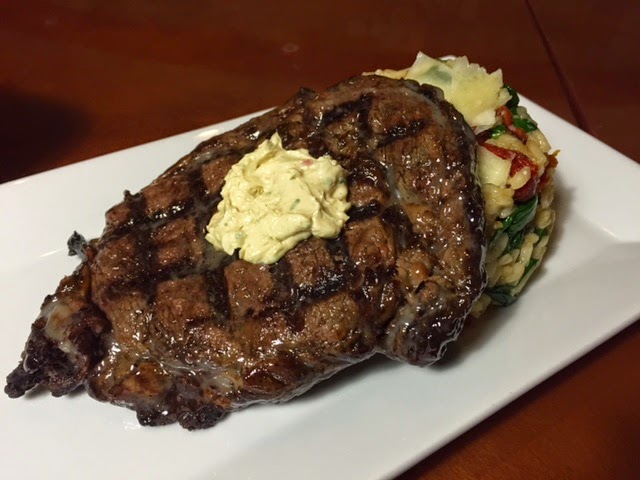 This was a good steak, and that truffle butter was an awesome addition. Believe it or not, the risotto was actually the star of this dish though. It was cooked perfectly and the flavor combinations were very complimentary.

Course 5: "Fireball Apple Cobbler: A new twist on a classic dessert. Fireball infused apple cobbler topped with cinnamon toast crunch fried ice cream. Our best selling dessert and something that I feel is new to most people." - Chef Red 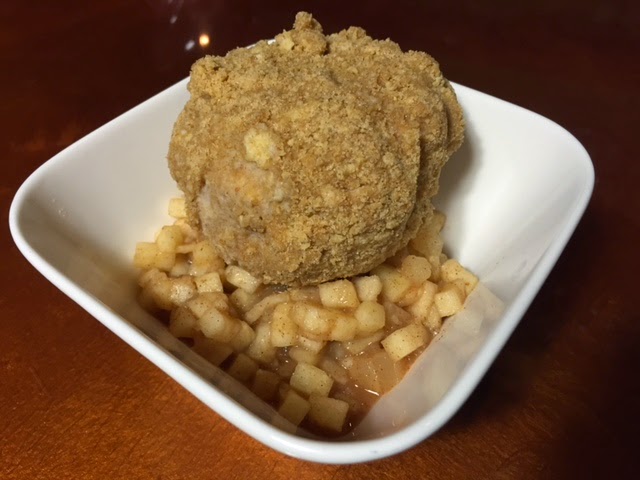 I'm not a big cobbler fan, so I mostly just ate the ice cream...and it was pretty great! I also took a few bites of the cobbler and thought it had a very nice taste.
We were also treated to a few cocktails. The first was a raspberry margarita, and was delicious! 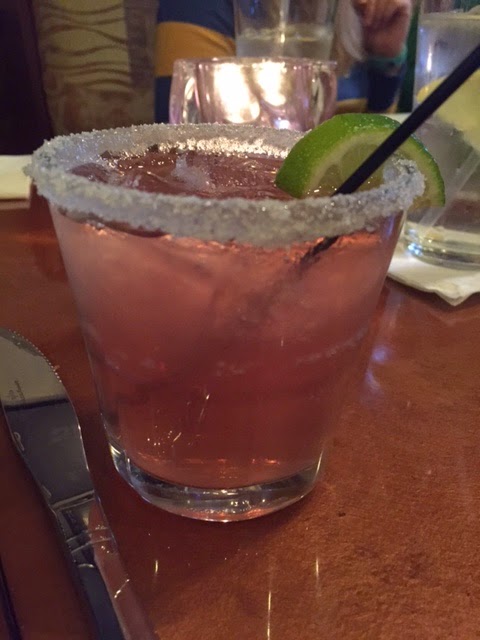 I can't remember the name of the second drink....probably because that mother was STRONG! 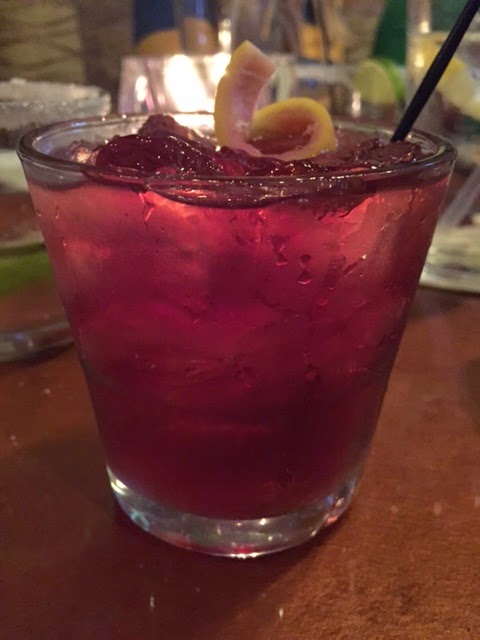 Verdict: Liked it!
Whiskey Jax is a great addition the the area. We met the owner and the chef and they are both awesome guys. We even went on a tour of the kitchen, which earned them major points with me! Everything was clean and well organized in the back. Another thing I really liked is that they use local ingredients and have beers from local breweries. I can see myself going back in the near future for brunch (which I heard is great!) If you are in the area, give them a shot! They also have over 100 different types of whiskey, so there is major potential for shenanigans!