I am a fan of the Super Food food truck, so I was happy to hear that they opened a restaurant downtown, Super Food & Brew. They have been open less than a week, so I understand they might have some kinks to work out with the food. On our visit, we were very disappointed. I got the Pretzelwich, which had ham, gruyere, havarti, prosciutto, and aiolo. For starters, I was expecting a pretzel bun, not a large pretzel cut in half. It was very awkward to eat and some bites were all pretzel while others were all meat. It had a mustard taste and was not very flavorful overall. I would suggest that they move to more of a pretzel bun, as that would be easier to eat and would compliment the meats/cheeses better. 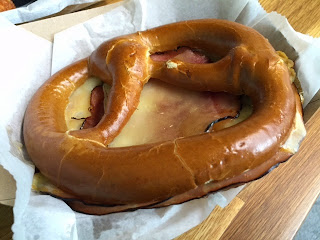 My husband got the Pork Belly Sandwich, which had pickled veggies, apple butter jam, and mint. He also was not a fan of his sandwich. Said it was very bland and the only thing that had flavor was the veggies. 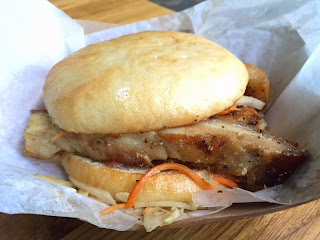 I couldn't leave without getting my favorite thing on the food truck, the Fried Mac and Cheese Balls. I am happy to say that they were as good as ever, but I was a little put off by just getting 2. I remember the truck serving 3, but it has been a little while so maybe they changed that as well. 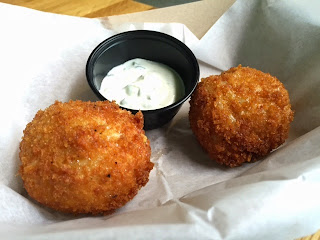 Verdict: Didn't like it
I feel terrible saying it, but we were highly disappointed. I'm hoping it just because they are brand new, but the food was very bland. I like that the new menu offers some new and old items, but I think those new items have yet to be perfected. I think they have great potential and I really hope things improve in the coming months.