Sbraga and Company is one of the most anticipated restaurant opening s of the year, so I was really eager to get in there. My husband and I visited on a Monday, which was the third day that they were open. We found it very odd that when we were seated at 7pm, there were only 7 other tables dining at the restaurant. I would think that with this being a new restaurant, it would have been packed for at least a few weeks. We were escorted to our table and our waiter came by to tell us a little bit about the restaurant and offered a few menu suggestions. We were told that the menu is broken out into sections, and that the Large Plates are mostly for sharing. The other sections are more individual portions or small plates.

We decided on the Hog and Hominy as our appetizer (crispy pork. cheese grits. & baby corn). It is listed in the “Crops” section of the menu. I was a little disappointed that our plate did not have baby corn, but instead had corn kernels. I really love baby corn so I was sad, but the dish still tasted wonderful. There were pulled pork pieces as well as crispy pork pieces which gave this dish some nice textures. The hominy was smooth and cheesy (but in a good way!) 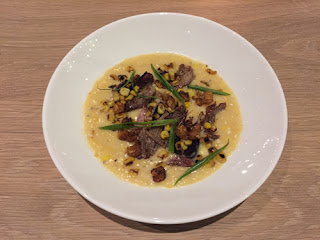 We ended up getting 2 large plates because that’s how we roll. I had my eye on the Pappardelle (vegetable sugo. jalapeño condiment. goat cheese). I have really been craving Italian food and this dish hit the spot. The highlight of the dish was the sauce. It was sinful. The only critique I have on the dish is that it was pretty bare other than the noodles. It did have finely chopped jalapenos but I would have liked something like mushrooms or baby corn added to the dish. 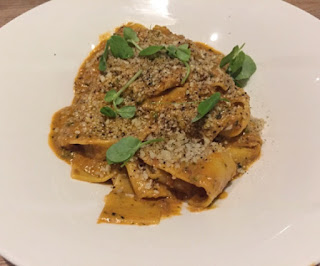 Our other large plate was the New York Strip (baby carrots. carrot pesto. smoked onion sauce).  This steak was a whopping 14oz and earned its large plate title. We ordered it medium and it came out beautifully cooked. It was fork tender and the seasoning was perfection. The carrot pesto was also really delightful. 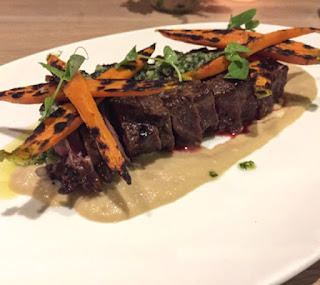 We also decided on a dessert, the Chocolate  Molasses Pie (pecan - pumpkin ice cream . buttermilk caramel). We LOVED this. The pie was very dense like a brownie consistency and the ice cream was fantastic! 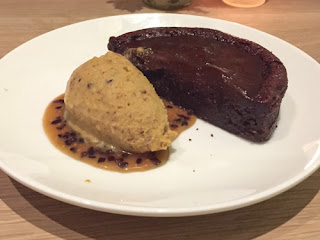 Verdict: Liked it
With new restaurants you never know what to expect, but we were very pleased with our experience. The service was superb and everyone we encountered was very friendly and insightful.  We really liked the food but the portions were smaller than we had anticipated. To clarify, the large plate dishes are really only enough food for one person and the smaller plates are appetizer sized entrees. Still, if you go in expecting that you shouldn’t be disappointed. The food is great and I look forward to trying other things on the menu, especially the fried chicken that my friend raved about.