I have been in search of good Italian food in Jacksonville for quite some time. So when I heard that Il Desco was opening in Riverside, I was thrilled to try it. I was one of the last of my foodie friends to go, and I heard some mixed reviews. My friends that attended the media preview thought it was great, but my friends who attended privately (once they were open) had a different experience. The main complaint I heard was “very bland”, and I hate to say that this sums up my experience as well.

Let’s start with the positives. The restaurant was very modern and beautiful. It was a little on the darker side, but they had big booths and tables in the middle. The kitchen is open so you can watch the action and there is a large bar along the side of the restaurant. We were seated and brought some complimentary bread to snack on. The bread was excellent and the garlic olive oil that came with it was great. One thing that baffled us was the presentation. It was brought out in a paper bag. I have no idea why this was done, and it actually took away from the value and presentation of the bread. 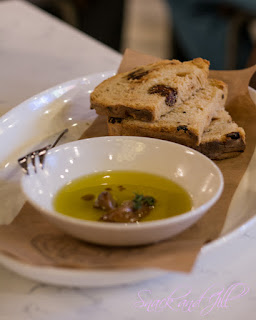 We decided on the Spaghetti Tacos (Braised short rib ragu, escarole, Pecorino Romano) for our appetizer. This was such a unique and intriguing idea, but sadly the execution was lacking. The taco shells were greasy and falling apart, the pasta was not fresh, and the short rib ragu was bland. The only thing that helped was the cheese that the tacos were sitting in. I scooped that up and put it inside the tacos to give them some flavor. 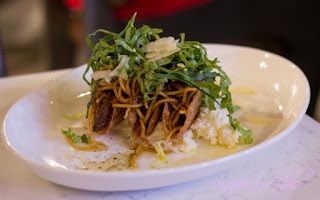 After the appetizer, I was pretty nervous about my entrée since it was also a short rib item. I got the Short Rib Bolognese (Pappardelle, short rib ragu, bittersweet chocolate, shaved Parmigiano-Reggiano). The only ingredient that I could identify by taste was the Parmigiano-Reggiano, everything else was terribly bland. I did not taste the bittersweet chocolate, and to be honest only realized it was in there as I was reading the menu to write this review. The short rib ragu was not a ragu; it was more of an unseasoned short rib with zero sauce. The pasta was pretty dry as well. This dish was a total miss for me, which was sad considering how delicious it sounded. 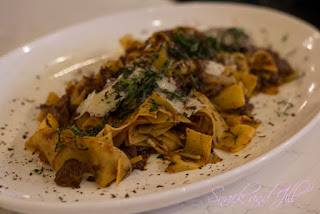 My husband had a hard time finding something on the menu he liked. He ended up getting the Spaghetti Arrabbiata (Tomato sauce, red chili, shaved Parmigiano-Reggiano, basil). He opted for an extra-large meatball on the top to give the dish some meat. He was also very disappointed with his dish. He said that the sauce tasted like tomato paste with no seasoning. Also, he was a little upset that the dish was so basic and that he had to pay $8 to add meat to it. 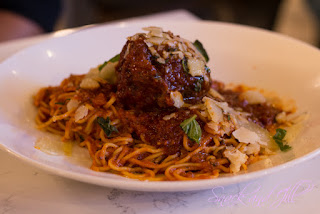 Verdict: Didn’t like it
We were both severely disappointed with Il Desco. As of right now, I would not return. It isn’t hard to see that they have so much potential, but they really need to tap into it and find their groove. The main problem is that everything was horribly bland. A little dash of salt/herbs here and there would have made a world of difference. Also, the menu itself needs a few little tweaks.  One of my husband’s main complaints about the menu was regarding the lasagna. Why not have another meat option for the lasagna besides rabbit? Also, the other pasta dishes were prepared using different meats, but not one of them had a chicken option. I think the option of different meats in these dishes would be very beneficial to the customer and to the restaurant.