I am always excited when something new opens up near my house, but I’m extra excited when it’s a new location for a place that I have heard great things about! Saucy Kitchen opened their newest location in the Regency area a few weeks ago, so I thought it was time for me to go in and try them out. I went in on my way home from work and there were a few people also getting some to-go items. When I walked in, I was greeted by the owner and he told me a little bit about the place and the menu. They had different items out on display for reference, and it was very helpful with deciding what to get. They have “fork and knife” sandwiches which are basically huge open faced sandwiches served with a pickle and chips. They also have smaller sandwiches, salads, and soups.

On this visit, I had to get the Mac and Cheese sandwich. I was immediately excited with the portion size, which was enough to feed 2 people… or one of me. I really loved the bread. It reminded me of soft French bread that had been lightly toasted. It was easy to cut through with the knife and was nice and fluffy. The mac and cheese was fantastic. It was rotini type pasta and the cheese was very creamy. It also has bacon in the mac and cheese but they do offer a vegetarian option.
I also got a cup of Mushroom Brie soup, but can you believe that I didn’t take a picture of it?! I guess I was too excited to dig into the mac and cheese  Well anyway, the soup was actually pretty fabulous! It was very hearty and had a very meaty flavor to it. I also loved the flavor the brie gave to the soup. I only wish I had bought some extra for lunch the next day, because I have been thinking about it ever since! 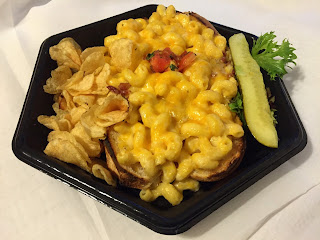 I had been eyeballing their massive cookies by the counter, so I was thrilled when the owner offered a complimentary one to me. I decided on the chocolate chip because I am a sucker for chocolate chip. As expected, it was amazing! 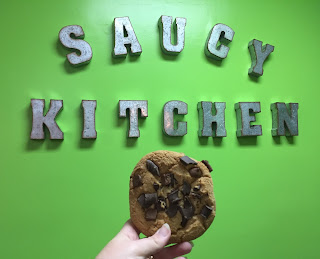 Verdict: Loved It!
I am really happy for this new addition to the area. Arlington has been on a decline in recent years and I’m ready for it to bounce back.  A lot of our restaurants and stores have left, so it’s nice to see some start to come back. I was very impressed with the food and the owner is an awesome guy that really cares about his customers. He was talking to everyone and said that he likes to give back as much as he can. He has a great attitude and I really hope for his success. I highly recommend Saucy Kitchen and I hope you all give them a shot. Everything I had was outstanding and I can’t wait to go back!