The German Schnitzel Haus might be Jacksonville’s only German restaurant, but I am sure that they would still be the best even with tons of competition. Chef Steve has a passion for cooking and it really shows in his dishes. He has been at the restaurant for about a year and a half, but has been cooking for upwards of 18 years. Even though he had limited experience with German cuisine before coming to the restaurant, I can say with certainty that he has now mastered it. Chef Steve’s wife Lisa is the front of house manager and you can often see her in the restaurant helping out the servers or seating guests.

We were invited out to try some of their new lunch offerings. All of the entrees can be made in 10 minutes or less, which is perfect for anyone who is pressed on time. We tried 2 different soups and salads for our first course; BLT Soup (regular and Vegan), Winter Harvest Salad and Cucumber Salad.

The (non-Vegan) soup had a lovely tomato flavor accented by the bacon. There was also a bacon crisp underneath the toppings which added some unique texture to the soup. The Vegan version included coconut bacon, which is pretty sweet when eaten alone, but it paired nicely with the soup. I have never been Vegan, but I imagine this soup would knock their socks off with its robust flavors.

The Winter Harvest Salad was rather large and packed full of ingredients. With green apples, bacon, walnuts, dried cherries, and feta cheese topped with haus made maple vinaigrette dressing, this is not your average salad.

The entrees started rolling out and my eyes were doing that cartoon, popping out of my head thing. Typically I think of lunch as being a sandwich or a small entrée. That is not the case here. To have a hearty lunch entrée reminiscent of a home cooked meal, it is a pretty rare and welcoming sight. We sampled 4 of the tart/pot pie items from the menu; Chicken Pot Pie, Sheppard’s Pie, Veggie Quiche, and Zwiebelkuchen. 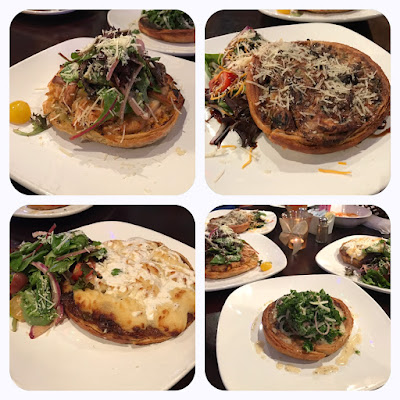 While they were all outstanding, the Sheppard’s Pie and the Zwiebelkuchen stood out as table favorites. Even though these were our favorites, they were both very different dishes. The Sheppard’s Pie has potatoes, carrots, onions inside a pastry crust. The top round is slow roasted to make sure it is super tender and flavorful, then the whole thing is topped with a small green salad garnish. This was actually the last dish I tried out of the 4, so I truly felt like I was saving the best for last.

The main star of the Zwiebelkuchen is the onions, even though it also has bacon, caraway seeds, and sour cream. As crazy as that sounds, they really give the dish some zing and pizazz.


The final dishes brought out by Chef Steve were an Open Faced Burger and Hühnchensandwich (Chicken Sandwich). The Open Faced Burger consisted of ground chuck, short rib, and a brisket patty topped with bacon jam. It is served on a snowflake bun (on the bottom) then topped with a potato cake, sunny side up egg, and red onions. My favorite part of the burger was breaking the yolk and watching the egg run all over the burger, much to the chagrin of my egg hating friend Anna. 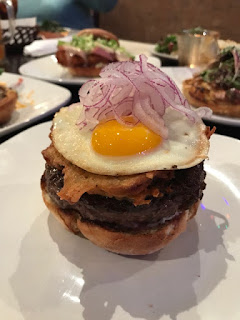 The Hühnchensandwich (Chicken Schnitzel, ham, Swiss cheese, Jaeger gravy with lettuce on a snowflake bun) was another standout item. By the time it was chicken time, we were so stuffed and cursing pants with zippers, but we powered through and showed that chicken who was boss. The chicken in the sandwich was juicy and the combination of ham, cheese, and gravy was a winner in my book. I don’t typically order chicken when I go out to eat, but I would definitely order this. It’s also worth mentioning that all of the snowflake buns are made in house. It is more of a soft bun with a flaky texture that enhances an already delicious sandwich or burger. 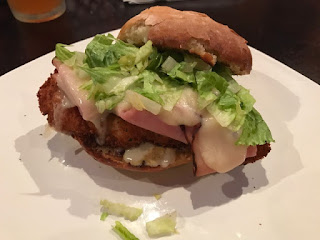 Verdict: Loved it!
The German Schnitzel Haus is a real gem in a city that is lacking a large variety of cuisines. Many people living here have never had the opportunity to try real German food, but I don’t think that should be a deterrent when deciding to visit German Schnitzel Haus. Their menu is very clear and explains every detail of the dish, so you don’t have to worry about not knowing what something is.  If you are visiting on the weekend, make sure to sit outside in the BierGarten so you can listen to the Oompah Band that frequently plays on Saturday nights. Also, make sure you get one of their many German beers that are offered on tap. My favorite is Hacker Pschorr Oktoberfest, but you can’t go wrong with any of them! They have 3 different sizes including a Liter, so you are guaranteed to leave with a full belly and a cheerful disposition!