Bread & Board, where do I even begin? I guess I will start by telling you that this is a new restaurant and concept in the Riverside area of Jacksonville. They are a sandwich shop but also offer deconstructed sandwiches on boards to encourage sharing. The restaurant has a large outdoor seating area under a pergola (uncovered), a grassy area with blankets for a picnic, and an indoor section with removable doors for an open air vibe (in Jacksonville, aka humidity central, that might be a problem). They also have a very unique soda machine instead of the traditional Coke/Pepsi offerings. I actually enjoyed this. It was something different and refreshing to see.

We went up to the counter to check out the menu and order our food. We picked out 2 sandwich boards, 1 meat board, 1 cheese board, and a dessert board. We were not given any options for sides, but later found out that we could have had chips or upgraded to a deli side for $2 more (which is is kind of absurd when you are already paying $12+ for the board, but I would have loved the option at least). Since we were not aware of this, all of our boards were dressed with the same greens and herbs. 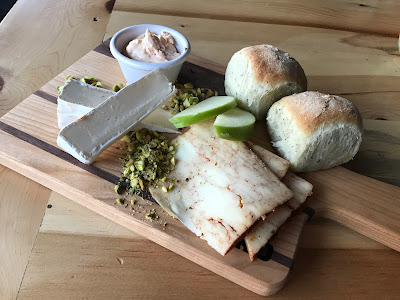 I will start with the good. The Three Cheeses board was our favorite board of the night. I would explain everything that was on it but the menu does not reflect what we were served, so sadly we will never know. We also enjoyed the dessert board (for the most part). There was one fatal flaw, but I will get into that later.


Now let’s just dive right into the bad. Jump straight into the deep end…the meat board was the most dreadful of the night. Per the menu, the House Meats came with cherry wood smoked ham, sweet tea turkey, low-n-slow beef, grainy mustard, & jam. Our board had an extra turkey, an extra sauce, and one dollop of the mustard (dime sized). The meat was sliced very thin, just like lunch meat you would buy in the store. I’m not opposed to thinly sliced meat…if it’s on a sandwich. To have random lunch meat selections on a board is just strange. What’s even stranger is when you are supposed to be building a sandwich but there are no toppings or bread. The board was served with 2 dinner rolls, so I guess I was supposed to make a slider? This concept would have worked better if we were given a choice of bread to actually make a sandwich with. The menu states that each sandwich/board comes with specific bread, yet all of our boards had the same 2 dinner rolls on it. We later found out that we could have ordered more rolls if we wanted, but that was not the issue. We had more rolls than we knew what to do with (story of my life), but what we really needed was sandwich bread. 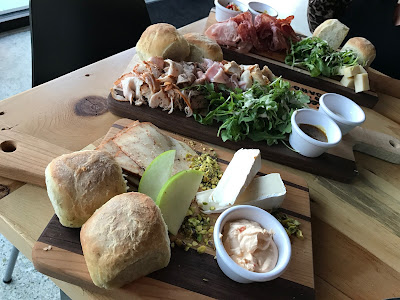 Some of these issues could be overlooked if the meat was stellar. Sadly, it was far from it. It literally tasted like Oscar Mayer that you could get pre-packaged at the grocery store. If you gave me a blind taste test between the two, I would not be able to tell the difference. I was sitting at the table naming off the types of deli meat it tasted like. That's how similar they were. I didn't like it when I was eating ramen noodles and ham sandwiches while making minimum wage, and I certainly don't like it now. The low-n-slow beef was utterly tasteless while the Sweet Tea Turkey tasted nothing like it's namesake, and was dry as old leather. Sadly, this is the only meat on the board that I would believe they make in house. To be perfectly honest, I was seriously wondering if they ran out of ham and turkey and made a run to Publix to finish dinner service.


The Braised Beef & Gorgonzola was another board that we were not thrilled with. It is described as brisket, fig mustard, grilled rapini, gorgonzola fondue, & grilled focaccia on the menu. That was actually pretty accurate, except for the bread. The board was served with the meat/cheese inside of a little bowl. I took a bite of the mixture and was overpowered by the cheese. My fault, I grabbed a top piece. After digging lower into the bowl I was able to find a piece of beef that wasn’t smothered, so I popped it in my mouth. The beef was on the verge of being overcooked and my friend hit the nail on the head with her description, it tastes like you cooked it in the crockpot on high for 4 hours instead of on low for 8 hours. There was nothing special about the beef, it did taste like something I could make in the crock pot. 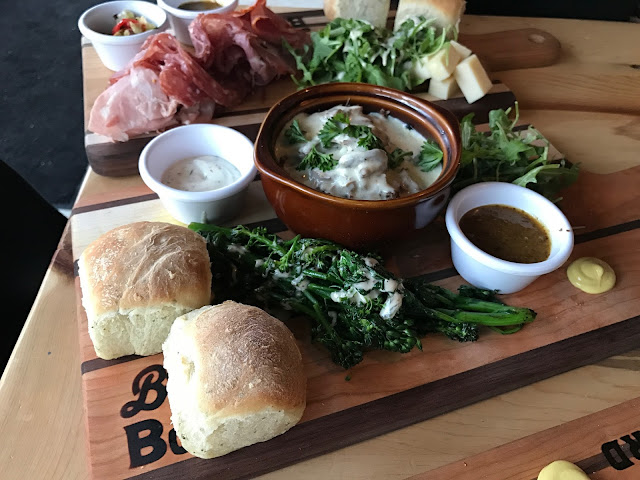 The Cured Meat Muffuletta was the best board by far. With bresaola, soppressata, pistachio mortadella, spicy ham-capi, oil packed peppers, olive relish, provolone, & community loaves’ bagel bun (which we did not have), this was the winner of the table. The meat was still nothing outstanding, but this board was the clear winner in a sea of disappointment. 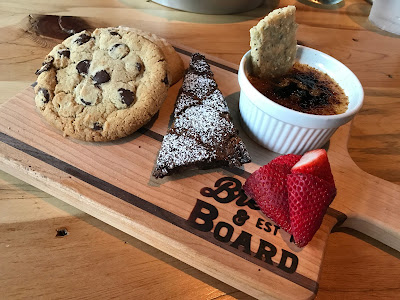 Now on to the Sweets board. The menu states that it comes with completely different items than we received. We were told the boards rotate so ours had a chocolate chip cookie, sugar cookie, brownie, crème brulée, and some strawberries. The brownie was everything you want in a brownie. It was gooey, chewy, and dense. The crème brulée was average. Nothing to write home about. The sugar cookie was pretty tasty but I couldn't wait to get the chocolate chip cookie into my mouth. Little did I know it would push me over the edge into a food rage. My friend took a bite of the cookie and told me it had a strange flavor. I took a bite and didn't taste it at first, but then it hit me. Like a tidal wave. I threw the cookie down on my dog bowl plate and tried to identify the interloper. We identified a few seeds inside of the cookies but we still have no idea what they were. All we know is that they did not belong in a delicious chocolate chip cookie.

Verdict: Didn't Like It
Going in, I really didn't know what to expect from this concept. I was hoping the boards would be more of a charcuterie than sandwich meat, but they were not. The Muffuletta was the closest we came to having a winning sandwich board but it also had it's problems. The sandwich boards all came with the same 2 sauces, which was very odd. Why not pick sauces that compliment the meat? You wouldn't notice unless you ordered more than one board, and maybe that is why they do it. Most people are not ordering enough food for a small village like we are. The cheese board was definitely the highlight of the meal. I hate the fact that it rotates, because you never know what you will be getting. A blogger friend of mine was in a few days prior and hated his cheese board. If he would have told us that before we ordered, we would have missed out on it. When we were ordering our dessert board I asked the cashier if the brownies came on it. She had to check since that board also rotates. I'm all for rotating menus but there needs to be some warning. Nowhere on the menu did it state that the items rotate on any of the boards. How can you have any consistency doing this? At the end of the meal we all discussed the food and the amount of money we spent. For $75 we could have ordered a nice meal at one of the best restaurants in Jax. That really put it into perspective for us. We paid fancy dinner prices to build our own sliders sandwiches. Never again. I have heard a few people say that they loved the place. It really makes me wonder if they truly loved it, or they just think they are supposed to love it. With a place like this, it's easy to get swept up in the novelty and forget that you are paying money to make yourself a sandwich.