Bonchon is new to the Jacksonville market, but from what I’m seeing online, is quite popular in other areas. They recently opened their newest location in the St Johns Town Center (along Gate Parkway, across from PDQ) and are currently having their soft opening. I stopped in for a visit on a Sunday evening around 6:30. The place was packed but luckily there were a few seats at the bar. I was expecting Bonchon to be an order at the counter kind of place but was surprised to see it is a full-service restaurant. We were greeted pretty quickly at the bar by our server who put in our drink orders as well as an order of Potstickers ($10.95). They have 3 different options, Soy Garlic, Spicy or half and half. Never having tried them before, we selected the half and half so we could try them both. They come 8 to an order and came out quick. I was a little surprised to see that they weren’t served with any dipping sauce, but forgot all about it once I took my first bite. The wrapper was crispy and brushed with their Bonchon Signature Sauce, which was fantastic. The potsticker was dense and packed full of ingredients. I loved it. 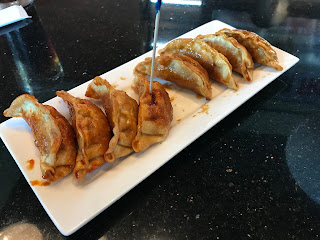 We had a little bit of a hard time ordering because they were out of many items, mainly the beef bulgogi. I originally planned on getting the Japchae but what would it be without the beef? So instead I went with the Udon Noodle Soup (Thick white wheat noodles served hot in an Asian spiced broth with assorted seasonal vegetables. Topped with sesame oil, nori and toasted sesame seeds. $9.95) They have a few different options for the soup so I chose the fried egg. When the soup came out, it was obviously the wrong one. Tentacles everywhere. So I sent it back to get the correct soup but you all win because I was able to snap a pic so you can see what it looks like. 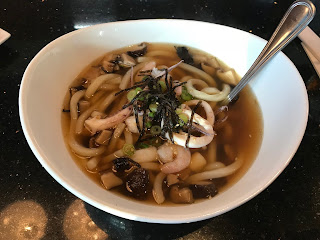 When the correct udon came out, it looked much more like what I ordered with an egg on top. The assorted vegetables mentioned above turned out to be chopped up mushrooms which made it harder to grab with the chopsticks. Leave em whole! Aggravation aside, I really enjoyed this dish. The broth had a nice flavor while still being on the milder, lighter side. The noodles were plentiful, nice and chewy. 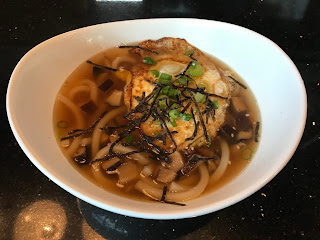 My husband went with the Bull Dak (Spicy chicken stir-fried with rice cakes in a fiery sauce, topped with thinly sliced scallions, onions and mozzarella cheese. Served with white rice and steamed vegetables. $14.95) We were told by our server that this is the “spiciest thing on the menu”, and he was not kidding. My husband has a high spice tolerance and was having a hard time eating this. He powered through and ate the whole thing because it was so good, but he also downed a considerable amount of water. It was very entertaining to watch. He did spot a guy at another table visibly sweating while eating the same dish so he was pretty proud of himself. 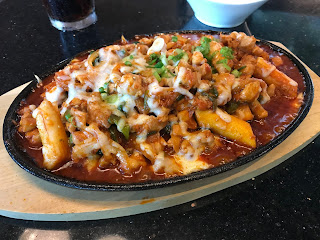 Verdict: Liked It
Considering this was the soft opening, they get a pass on the order being wrong and being out of certain menu items. That’s the purpose of a soft opening and I won’t hold that against them. Even with those slight inconveniences, the food and service was still great. They were prompt, attentive, and friendly. The only small gripe I have is with some of the prices. $10.95 seems very steep for potstickers, but I’m not gonna lie, I will order these delicious morsels every time. I think this will be a great addition to the town center and we can’t wait to go back and try some of the other beef items on the menu, especially the bulgogi.