Cousins Maine Lobster is a new restaurant in Neptune Beach, but they got their start in an interesting way. They opened in 2012 as a single food truck in LA. Shortly after, they appeared on the TV show Shark Tank and received an investment from one of the “sharks”, then their business took off. They expanded their truck fleet and started opening brick and mortar restaurants. Jacksonville was lucky enough to snag one of the newest locations so I went in to see what all the fuss was about. 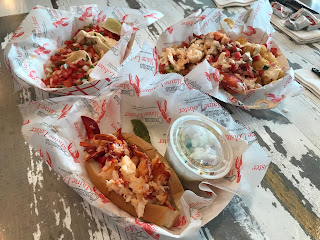 I arrived the Tuesday after opening weekend. It was a tough weekend for them because they ended up running out of food due to the massive crowds (which is a great thing!) They ended up closing on Monday to regroup, and reopened on Tuesday with a limited menu. We showed up around 6pm and were very surprised to walk right up and order. I was terrified that I would be standing there for an hour, but that was not the case. I knew I had to try the lobster roll, but I was undecided on the other items. We perused the menu and came up with a few more items to try, the Lobster Tacos and the Lobster Tots.

I am a huge tot fan so I was pumped for the Lobster Tots ($13.50). I am a little on the fence because they weren’t bad, but they could have been improved with a few small changes. First, the tots are covered in pico de gallo. Do you know how hard that is to eat? There is a small drizzle of cilantro lime sauce along the top of the tots as well. I feel like there needed to be more sauce since I ended up eating a lot of dry tots, at least half of the basket. This could easily be remedied with a side of sauce in addition to/instead of the drizzled sauce. My second issue is that the lobster pieces on top of the tots were humongous, like entire claws. While that’s awesome because you feel like you are getting your money’s worth, it makes it harder to eat. My husband and I kept trying to cut up the pieces to redistribute them. I do have to say that the tots themselves were pretty good. Very crispy.

The Lobster Tacos ($14.25 for 3) were another item that I didn’t love. While you do get a lot of lobster inside of the taco, I feel that the taco itself was lazy. The shell is a store bought white soft shell and the toppings were basic; cabbage, pico de gallo, and cilantro lime sauce. While some people might not take any issue with this, I wanted something more. Maybe some avocado and green onions thrown in there. Cabbage and pico felt like something I could get anywhere.

Now on to the star of the show, the Connecticut lobster roll ($16.50). Cousins has 2 different lobster rolls, one served warm and one served cold. The Connecticut was served warm with slaw and a pickle. The roll was overflowing with lobster and was served in a folded piece of garlic bread, just the way it should be. We absolutely adored this roll but just a warning, it is a little on the small side. If you are familiar with lobster rolls this might not be an issue. But to anyone new to the game, it might be a problem. My husband and I split the roll and he had his half done in 2 bites. While that could mostly be attributed to his big mouth, I still wish the roll would have been bigger. I would have loved different size options or maybe just a size explanation on the menu so people won’t be caught off-guard. With that being said, the roll was fantastic! The bread was light and buttery without being soggy. It really held up to the weight of the lobster. The lobster pieces were large, plentiful, and buttery. I did find out after the fact that you can request a side of butter to go with your roll, so heads up on that! 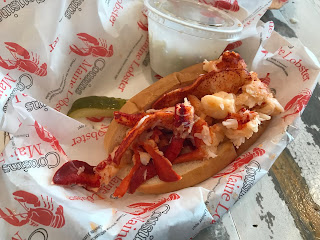 Verdict: It was OK
This is a tough one for me because it wasn’t bad, it just wasn’t great either. The lobster roll was out of this world good, but everything else was not on that level (or even close). I also think the prices/portion sizes might keep people away. We ordered 3 food items, spent $55+, and left hungry. As I said before, the lobster rolls are great, I’m just not sure if that’s enough to keep people coming back. If you’ve been, let me know in the comments. I’m curious to see how the public votes on this one.