Murray Hill has a new taco spot, Murray's Taco Bodega. They are located next to Maple Street Biscuits in the recently shuttered B Street Eats. While I was sad to see that go, I am thrilled that Murray's moved in.  Murray's is a fast casual concept where you order at the counter and have your food brought out to you. The restaurant is large and open with indoor seating as well as some outdoor seating in the back. 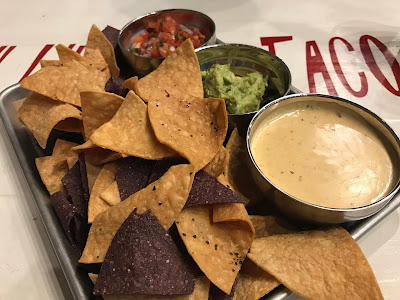 We weren't sure what to order so the guy working the register gave us some suggestions, which actually turned out to be some of the same things we were considering ordering. We started our meal with the Chips & Dips Flight. This flight came with Salsa, Guacamole, and Queso. I was immediately struck with how delicious the chips looked. The were thicker than your average chip, but still easy to bite into. The woman who brought the flight to our table explained that we got the last of the guacamole, but they were making more and would bring it out as soon as it was ready. I was a little surprised by this because if she didn't tell me that, I probably wouldn't have questioned the amount of guacamole received. But I wanted to let you all know since the picture does not reflect the usual order amount.

In addition to the Chips & Dips Flight, we ordered 5 tacos and a side; Murray's Signature Taco, Jerk Chicken, Brussels Sprout, Brisket,  Shrimp, and Charro Beans. 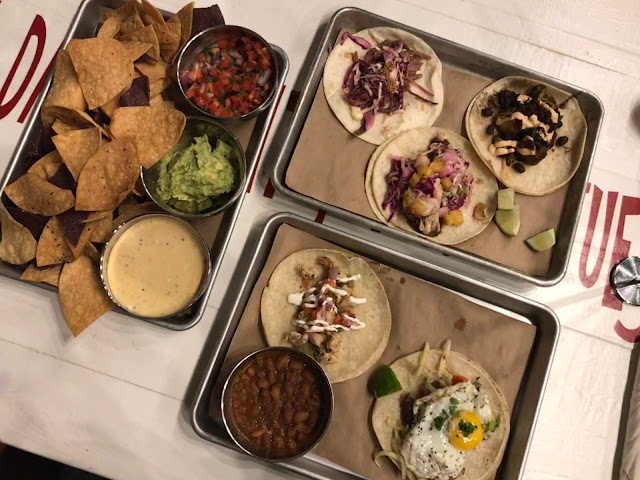 It was hard deciding what to try first, so I just went around taking bites of everything. I started with the Brisket Taco since I really wanted to bust that egg. The brisket was very tender and I was really pleased with how the pepper jack and egg complimented the meat. Next I tried the Shrimp Taco. I really liked this one as well. The salsa verde, pico, and lime crema gave it a nice flavor. I took a quick bite of the Charro Beans and did not want to stop. They were meaty and delicious. 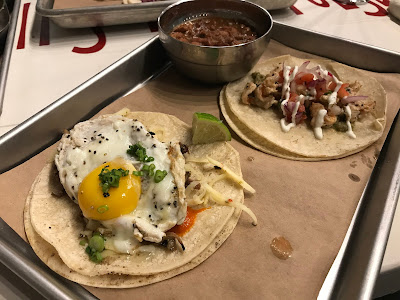 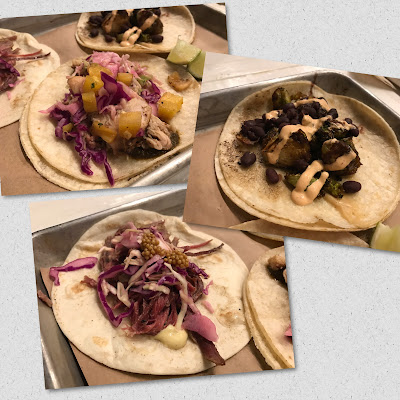 I made my husband switch plates so I could try the remaining tacos. First up was the Brussels Sprout Taco, mainly because I was very intrigued. It did not disappoint. With black beans, chipotle crema, and roasted garlic, this taco was a winner. If you are a fan of brussels, get this taco. Another favorite of mine was the Murray's Signature Taco. I'm not usually one to get corned beef but I always want to try a restaurant's signature dish. Wow, this taco lives up to the menu's hype. I am not a mustard fan but there is something about dijon mustard that I like. To me, the dijon crema is what made the taco. Since spicy food doesn't love me, I was saving the Jerk Chicken for last. It had a nice peppery tang to it which was offset somewhat by the pineapple.

Verdict: Loved It!!
I wasn't sure what to expect with Murray's. Being a new taco restaurant in the heart of Murray Hill, it could have gone either way. I'm happy to say that Murray's is a very welcome addition. While there are a few other taco places in the area, they do not compare. Many places will stick some shredded cabbage on there, charge 5 bucks and call it a taco. Not Murray's. In addition to being reasonably priced, it feels like they really put some thought into the tacos. All of the toppings seem meticulously planned to maximize flavor and nothing seems out of place. There are no fillers. All of the ingredients are complimentary and only add to greatness of the taco. Not only is the food fantastic, the service we received was stellar. Murray's is a perfect addition to Murray Hill and I would definitely recommend giving them a shot sooner rather than later!