Down in the heart of 5 Points on Lomax St is where you will find Jacksonville’s newest taco shop, Taqueria Cinco. Nestled into a tiny spot between Bakery Ribault and Wells Fargo, it’s easy to miss if you aren’t looking for it. We went in on a Sunday afternoon to give them a try. First impression, this place is tinyyyyy. But don’t let that deter you, they offer outdoor tables in addition to the indoor ones. The interior seating has about 5-6 tables all along the wall opposite the kitchen, with the exterior having many more tables spread out across the patio.

Once you enter you are given the indoor/outdoor option, then taken to your seat. We were seated at a table in front of the kitchen (which is also tiny). I love being seated near the kitchen so I can watch them in action, so this was perfect for me. Our server came around to offer us water and take our order. We started with some Guacamole and Elote (Mexican street corn - Cotija, lime, Cholula-Mayo). I judge all Mexican restaurants on their Guacamole, and Taqueria Cinco passed my test. It is served in a bowl topped with onions and cilantro and the portion was larger than expected. We were very pleased with the taste and texture and had to physically stop ourselves from eating it all in anticipation of the other food we ordered. 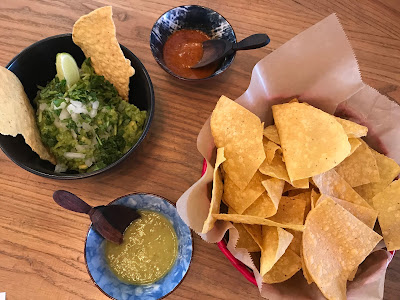 The next thing we tried was the Elote. It was served in a bowl, off the cobb. I actually preferred it this way since I didn’t have to embarrass myself by eating it straight off the cobb. No one needs to see all that. Even though the corn was served in a non-traditional kind of way, that did not stop it from being great. All of the proper street corn flavors were present and the kernels were topped with cheese in the bowl. 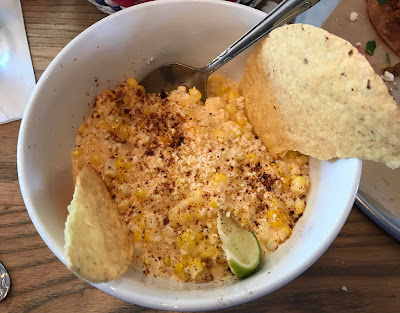 For our tacos, we each ordered two. My husband got the Cochinita Pibil and Suadero and I went with the Chorizo and Repollitos. I wanted to get a vegetarian one out of sheer curiosity, and once I saw a Brussels Sprouts taco, it was mine. The Repollitos taco comes with Oaxacan Mole Negro glazed Brussel sprouts, queso fresco, and Pickled onions. I’m not typically a mole fan but I wanted to give this one a try anyway. After all was said and done, I am still not a fan, but the mole didn’t stop me from enjoying this taco. The Chorizo was definitely my favorite. It was not overly greasy like you usually find with chorizo, and the shell had a coating of cheese baked onto the inside for added support. 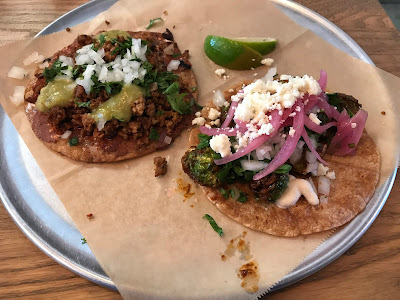 I did manage to get a bite of my husband’s Cochinita Pibil taco (I need to be quicker next time to get both). I had a bit of menu envy because this taco was divine. It comes with Yucatan style roasted pork wrapped in banana leaves with citrus and spices, pickled onions, and Habanero-carrot salsa. The pork was cooked perfectly but the star of the show for me was the Habanero-carrot salsa. It was sweet but not spicy, the flavors really stood out above all others. It really kicked this taco up a notch, and I would put it on everything if I could. 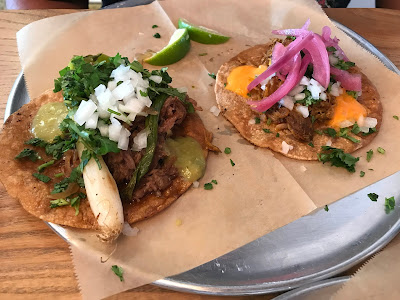 There was no way we were slipping out without dessert, especially once I saw Churros y Chocolate on the menu. The churros were served in a bag and were about 1/3 the size of a regular churro, which actually made them way more convenient to eat. They were like little churro nugs. The chocolate was rather mild and more along the lines of a dulce de leche. I would have preferred a darker chocolate but I am not complaining. I would totally still drink this from the ramekin with zero shame. 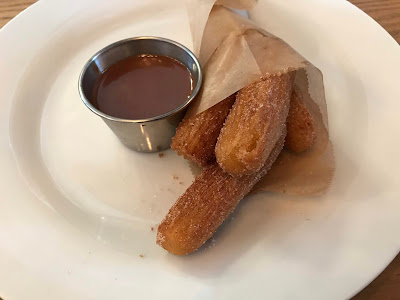 Verdict: Loved it!
Taqueria Cinco is a perfect addition to the Riverside area. love everything about this place from the interior, to the service, to the food. It felt like a restaurant you would find in a big city like Chicago or New York, just had that kind of vibe. To me, the food was like authentic meets modern. Kind of a fusion of both. The only tiny criticism I have is that I would prefer the tacos have two shells instead of one. We found that by the end of the taco, the shells started to break down and things started falling out. A double shell would fix this issue. Regardless of the shell situation, I will definitely be back soon!