Ever since our failed outing, we have been craving Carmine's Pie House in Riverside. This time, we made sure to show up AFTER they opened! The place was packed and I was worried about finding a table. Luckily, we found a small booth on the right side of the restaurant and sat down. The waitress came right over within a few minutes and took our drink order.
We decided on an appetizer, the Hand Breaded Mozzarella Planks. They came a few minutes later with a side of marinara sauce and a small salad garnish. Now I see why they call then planks, they were HUGE! The planks had light breading, but not too light...it was just right. I would also like to say that I am very picky about my marinara sauce. Most sauces are too chunky for me and I don't really like that. Well, Carmine's marinara is GREAT! It is not too chunky and is blended quite nicely. I would highly recommend the planks. 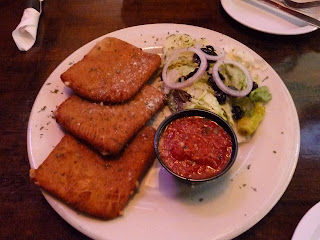 My husband loves Chicago style pizza. We used to go to Chicago Pizza, but we have been boycotting them ever since the bartender tried to steal from me (charging an extra tip on my card) and the manager didn't care when I told him about it. We gave them a second chance and had another bad experience with overcharging and them not willing to fix the error. Anywho...
So, we have been craving a good Chicago style pizza for forever. I am happy to announce that the Chicago Stuffed Pizza Pie at Carmine's is wonderful! The pizza comes sliced into 4 quarters. It is true Chicago style with the sauce on the top. There is so much cheese inside that it takes 2 people to get it on your plate-one to pick up the slice, and one to cut the cheese (LOL!) The only negative thing I can say is that I wish it was larger. It only comes in a 10" size and I would kill for a bigger one. 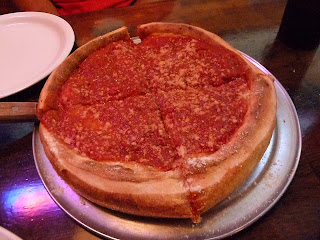 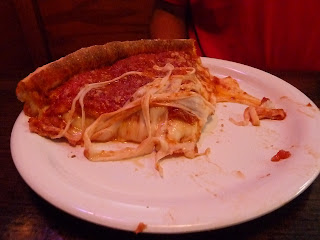 I was feeling a bit saucy, so I also ordered the Lobster Mac and Cheese. I don't know if you can tell by the picture, but the plate was MASSIVE! It was as big as the pizza! When the runner brought it, she asked if I was going to share it. I said "probably not" and she said "that's my girl!" I tore into it and it was delicious. The pasta is shell pasta (which I have never seen in mac and cheese) and it is swimming in cheese sauce. At first, I couldn't find the lobster, but then I struck gold. The pieces were large and plentiful. I could only eat a third before I was stuffed. I am pleased to announce that it was just as good the next day for lunch. 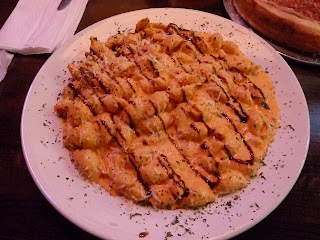 We have been to Carmine's a few times and we love it. The service is great and the food is worth every penny. They are a fairly new restaurant, and I really hope they stick around a while. If you are in the Riverside area, give Carmine's a try!