We initially set out to visit Carmine's Pie House this weekend. When we realized that they didn't open for an hour, we decided to venture out and try something new. We landed at Kickbacks Gastropub (website is down, here is their Facebook page) in Riverside.


We sat down at a booth next to the beer menu (on tap).
We hadn't initially intended on drinking, but after staring at that menu for a few minutes, we caved! 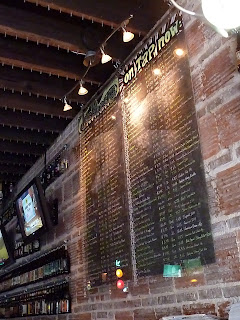 The entire ceiling is covered with beer taps. It is quite intriguing!! 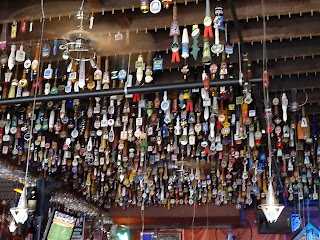 I ordered a Bold City Golden Ale and the Create Your Own Pasta. My creation was shrimp, fettuccine, and alfredo. The plate of food was MASSIVE! But to be honest, I didn't love it. It was a little too garlicky for me and I only ate 1/3 of it before it started making me sick (it was too rich.) On the plus side, the shrimp in the alfredo were definitely of the jumbo variety! 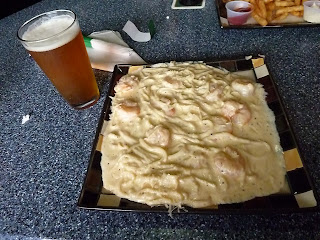 My husband ordered a Kilkenny Irish Creme Ale. I took a sip of his beer and it was delicious. Very smooth and has a nice cream taste to it. His entree was the Stuffed Burger (with blue cheese) and he added Bacon. 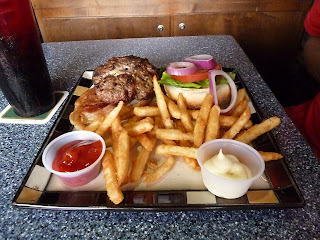 Overall, Kickbacks is a great place to "kick back" with some friends and enjoy a few beers, but I wouldn't seek it out for lunch/dinner. The service was really bad and we were left by ourselves for long periods of time with no "check ins". When we were ready to go, the check took over 30 minutes to arrive (because the waitress never came back). We put our card in and it sat there for another 10 or so minutes before she came back and mumbled something about a soccer team and walked away. We also had different servers walk right past us and never acknowledge us. I realize that we are not their table, but don't you notice people just sitting there? Not a fun experience, and another beer might have made it better...if the waitress ever came back to ask if we wanted one.
UPDATE: Mike from Kickbacks contacted me about the service. He apologized and told me that he would speak with the server about this. I thought that was really awesome of him and I really appreciated it!
To end the blog on a happy note, here is how they reserve tables :) 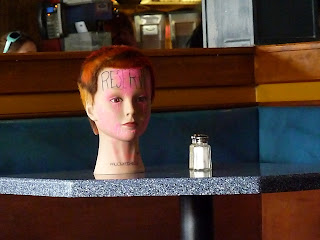