Last night I was invited by the Folio Weekly Bite Club (Facebook Page) to attend their monthy dinner. This month, the dinner was held at Crabcake Factory in Jax Beach. Here is the menu for the evening. 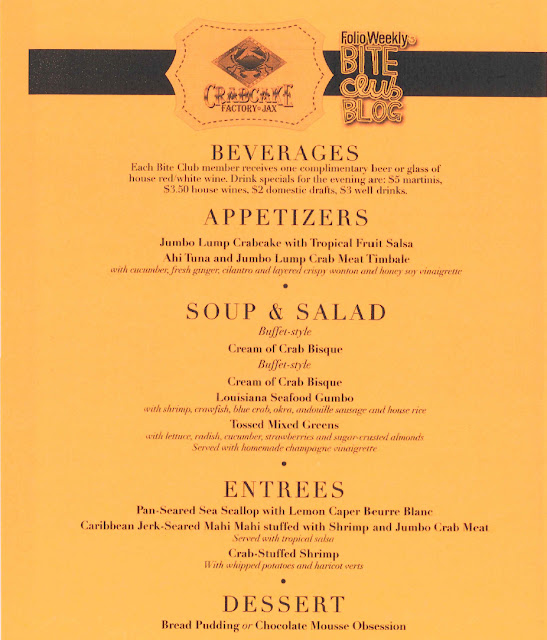 When we arrived, we were treated to one complimentary beer or wine and there was a soup/salad mini bar. Please forgive me, I forgot to take a picture. When I finally realized it, there were too many people over there to get a clear shot, so you will just have to take my word for it :) The bar consisted of Tossed Mixed Greens (which I did not get), Cream of Crab Bisque, and Louisiana Seafood Gumbo. The crab bisque was very creamy and had quite a few crab pieces. There were a few in every bite. The gumbo was nice and spicy. It was presented with some very large crab legs in the pot. I really wanted to grab one and crack it open, but that would have been uncivilized!
After a few minutes the servers came around with appetizers. The first one to come around was the Jumbo Lump Crabcake with Tropical Fruit Salsa. After they realized that we had no silverware, they quickly came around with forks and we all dug in. The crabcake was delicious and had absolutely no fillers. The fruit salsa was good, but I didn't think the crabcake needed anything extra. There was also a sauce in the ramekin and it complimented the crabcake quite nicely. 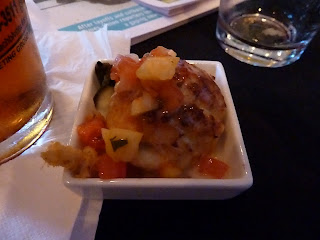 Next up was the Ahi Tuna and Jumbo Lump Crab Meat Timbale. I was a little hesitant at first (because I don't love tuna), but I decided to give it a shot. This was by far the messiest thing we had to eat, but it was also very delicious. I really liked the addition of the crispy wonton on the bottom and the honey soy vinaigrette gave it a wonderful flavor that left me wanting to grab more off of the tray! 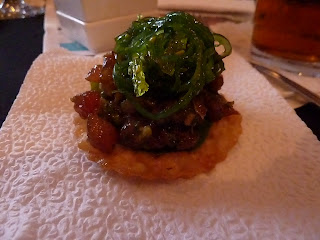 After the appetizer section, we were seated in a private dining area to enjoy the main entrees and dessert. I was pleasantly surprised when Caron the Bite Club host announced that we would be receiving all 3 entrees! I was already having a really hard time deciding what to get, so this made my day. All of the entrees were served on one plate. I have a system of deciding what to eat first. The system basically is eat the best thing last, so I tried all 3 and then ranked them. 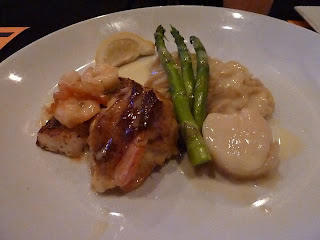 First up was the Caribbean Jerk-Seared Mahi Mahi stuffed with shrimp and Jumbo Crab Meat (served with tropical salsa.) I think the name was a little misleading. The meal was a piece of mahi mahi with a few shrimp on the top and no crab in sight. I was missing the tropical salsa and had 2 small pieces of tomato in it's place. The fish was overcooked and tough. It's a shame because the glaze and the shrimp were tasty, so I know this could have been great. I know it's really hard to cook for 40 people at one time, so I let this one slide and moved on.
Next on my agenda was the Pan-Seared Sea Scallop with Lemon Caper Beurre Blanc. The scallop was so tender that my fork slid right through it! The sauce was one of the most wonderful things I have ever tasted. I had to try really hard to not lick my plate.
The entree that I saved for last was the Crab-Stuffed Shrimp with Whipped Potatoes and Haricot Verts.
I'm not gonna lie, I have no idea what haricot verts are and I still don't know. I'm assuming it was asparagus because that was the only other thing on my plate. This entree was the most delicious thing on the plate by far. The crab-stuffed shrimp reminded me of a huge crabcake with shrimp included. It had a great taste and included zero fillers. The whipped potatoes also had major star quality. They were light and fluffy and the chef put the lemon caper buerre blanc sauce over them. I could have eaten those by the gallon!
For dessert we were given an option of Bread Pudding or Chocolate Mousse Obsession. My husband and I got different things and decided to split them. I thought I would never say this, but dessert was my least favorite thing of the night. It's not that it tasted bad, but my strange eating habits ruined it for me.
The bread pudding was in the middle of a delicious caramel sauce on the plate. It had raisins and coconut pieces in the bread pudding and that's where the train went off the tracks for me. I really don't like crunchy pieces in my food (hence my distaste for onions), so the coconut really threw me for a loop. However, everyone else including my husband really enjoyed it. 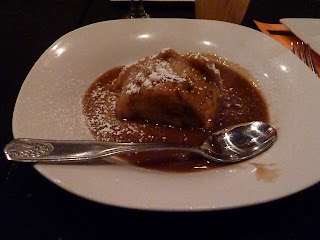 We waited and waited but the chocolate mousse never came. We eventually had to flag down a waitress and she went to the kitchen to get it. When it came out it was missing the strawberry piece that everyone else had, so my husband was disappointed in that. The mousse was served on a chocolate piece that sort of tasted like a brownie. The mousse was garnished with a raspberry sauce and that is when it went south. I don't like raspberry sauce, so this killed the entire dish for me. I wish that would have been in the description because I had no idea it was on there. I tried to pick around the sauce, but I only ended up eating a spoonful and gave the rest to the hubby. It was a shame for me because the mousse and the chocolate piece on the bottom were very good. Again, everyone else seemed to enjoy it, so I know I am in the minority. 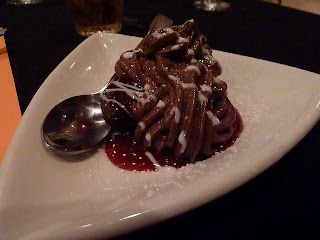 After we were finished eating, the Executive Chef and the Sous Chef (father and son) came out to talk to us. They told us a little about themselves and their history. It turns out that Chef Kahn Vongdara is from Maryland, so he knows his way around a crabcake! He has opened quite a few restaurants in his career and now he is trying to focus on one restaurant since the economy went south a few years ago.
**Also, something I wanted to point out. He sold the restaurant and the new owners did not do as well. They closed the restaurant last January. Chef Vongdara came back and reopened this year.** 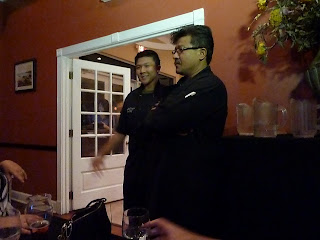 Overall we were very pleased with the Crabcake Factory and will definitely return in the future. We were told that they are going to be having different nighly secials and we can't wait for that (especially the Wednesday buffet!)