Last night we were invited to attend the Folio Weekly Bite Club dinner at Boston's. We have been wanting to try this place for a while, so I was really excited when I received an invite!
When we arrived we were treated to a complimentary drink. Here is Ivan enjoying his :) 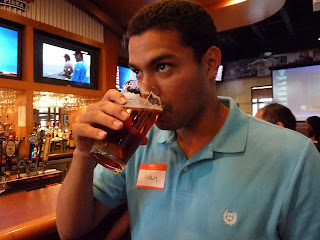 Soon after, the Flatbreads were brought out. We were treated to 3 different kinds; Flat Iron Flatbread, Spicy Chicken Pesto, and Margherita Flatbread. (Full menu is at the bottom) My favorite of the 3 was the Margherita Flatbread. There is something about the lime that made this absolutely delicious! The Spicy Chicken Pesto was also really good due to the inclusion of feta cheese. The Flat Iron Flatbread was my least favorite, which is weird because I was sure that it was going to be the best. It's not that it was bad, it was just a little bland compared to the other 2. 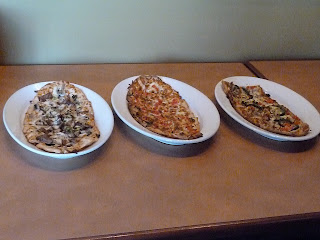 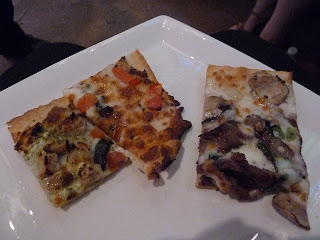 After social hour we all went into the dining room for dinner. We opted for a booth and had 2 other people sit with us. We had a great time and the conversation was fun. 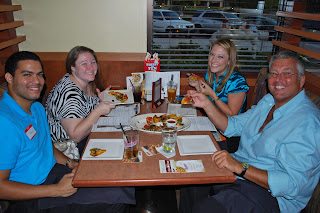 The servers started bringing the appetizers out and we received the Bacon-Wrapped Steak Skewers first. The steak was cooked medium (more towards the well side) and the bacon was a nice addition. The Bleu Cheese Cream Sauce was drizzled on the plate and I wish I had it on the side instead. It kind of got lost in the steak juices so I wasn't able to really taste it. 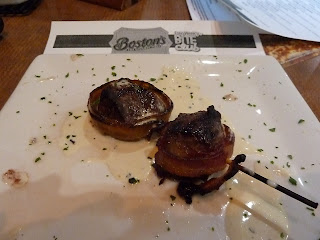 The Southwest Ravioli was the next thing that was brought out. They were served with ranch dressing, so I was already liking it :) The ravioli was very cheesy with a nice kick from the monterey jack cheese and jalapenos. I thought they were really good and could have eaten a whole meal of those! 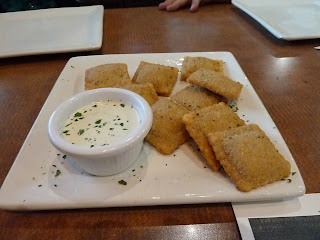 Watch out! This can ruin friendships!! 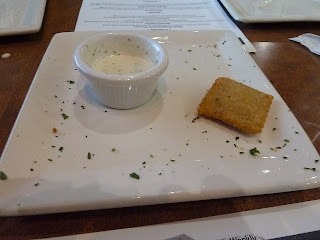 The last appetizer of the evening was the Boston's Nachos. I didn't care too much for these. To me, they were a little bland and lacking something. I think they would have benefited from some queso or guacamole. 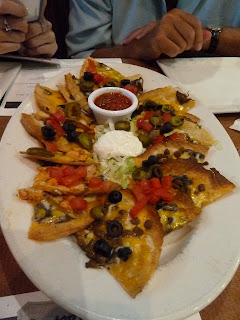 Next up were the salads. We were brought out a big bowl of The Santa Fe. As you know, I am not a huge salad person, but I thought it was really good. The dressing had a nice flavor to it and I liked that the salad included black beans and guacamole. 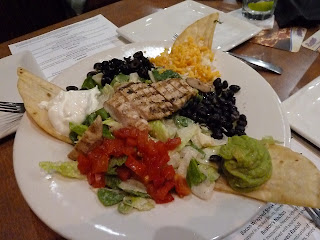 We sat there for a while and the second salad offered never came out. We thought that we were accidentally skipped and didn't worry too much about it...until the entrees started coming around. Out of the 3 entrees, the only one we got was the Spicy Chicken and Broccoli Alfredo. We all dug in and started wondering where the other entrees were. Then we started noticing that every table was getting something different, and I overheard one of the waitresses saying that we can swap with someone else if we want to try theirs. Ummmm what? So we proceeded to go around and have a swap meet make a few trades in order to taste everything. This might have been fine for everyone else, but as a germaphobe, I really don't like eating something that a bunch of other people have touched. I managed to push my phobia aside somewhat, and got a taste of everything.
The best (by a mile) was the Spicy Chicken and Broccoli Alfredo (pictured). The dish had just the right amount of alfredo to give it flavor and not have the noodles swimming in the sauce. The Shrimp Tortellini were OK, but I would have liked the shrimp to be inside the tortellini instead of being separate in the sauce. My least favorite was the Jambalaya Fettuccine. To me, it tasted like spaghetti instead of jambalaya. 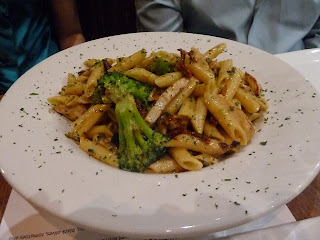 We were also given some breadsticks to go with the pasta. Yummm! 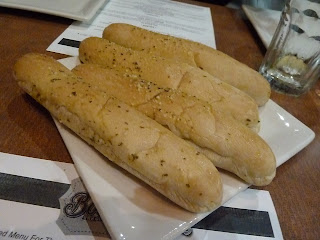 We were also treated to pizza, and there were 10 different types offered. Our table was served the Spinach and Artichoke pizza. We did not sample it and proceeded to try and make a trade. We were able to trade for the Mama Meata, which was very meaty. I thought it was pretty good, but you have to be a huge carnivore to enjoy it. 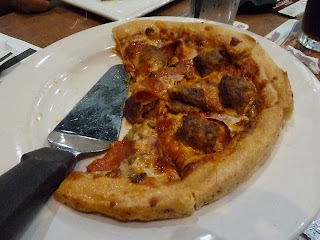 Luckily for me, Caron came around offering The Flying Buffalo, which is the one I really wanted to try! I thought it had a very nice taste and the buffalo sauce was good without being too hot. 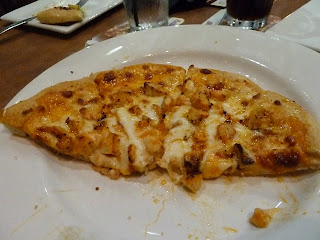 For dessert, I had the Brownie. It came out scorching hot, so I had to wait a little while before digging in...which was torture! When I finally got into it, it was so good that it melted in my mouth! 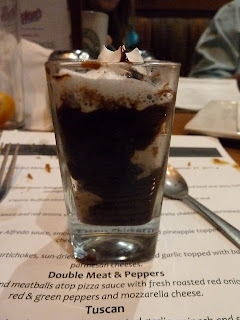 Ivan got the Apple Cheesecake and said that it was the best apple dessert he has ever had! 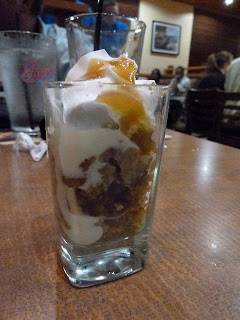 Overall the food was good, but I was very disappointed in how it was distributed. I would have preferred having a small amount of everything (in order to taste it), or if that was not feasible, at least having an option of what I was going to get (even if we all had to decide on one thing per table). That was really the only thing that was a problem. I am pretty sure that I will be back to Boston's in the near future.

Here is the menu for the evening: