We were first introduced to Vinny's Pizza through a Groupon. This was back when Groupon was new and I bought everything that came on there! At first I had a little bit of buyers remorse, but we decided to give it a shot and we really liked it. Well it came around on the Groupon again recently, so I bought another one. We went there last night and I decided to try something different. I went with the Chicken Marsala. When the waitress brought it out I was shocked because it was so huge. I dug in and was pleasantly surprised. While it didn't taste like a chicken marsala from a fancy restaurant, it was still pretty good. The chicken was tender, there were plenty of mushrooms, and the sauce had a nice creamy flavor. I ended up taking half of it home because it was easily enough food for 2 people. 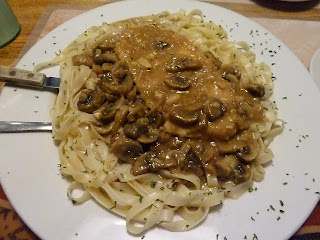 Vinny's real specialty is the pizza. Ivan ordered a 16 inch pepperoni thin NY style pizza. Yes, the pizza was all for him. He ate half at the restaurant and will eat half tomorrow for lunch (he is a growing boy.) Vinny's is one of the better NY style pizza's in Jacksonville we have had. The crust is not too thin, and the cheese/sauce ratio is just right. 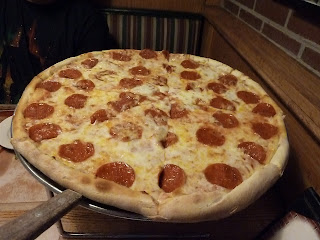 If you have never been to Vinny's, give it a shot. It is easily overlooked because it is located in a strip mall near the corner of Beach and San Pablo. They have a Mon-Thurs cheese pizza special for $7.99.