While driving home from the Speckled Hen a few weeks ago, I saw that there was a new sub place on Philips and Baymeadows in front of Lowes called Ancient City Subs. I have heard of them and wanted to try them out, so I was really excited to see this! The next day I was at work, I went for lunch. When I walked in I was immediately greeted by the owners (I assume) and asked if I have ever been in before. I told them no and they told me a little about the place and the sandwiches. The Cuban is the #1 seller followed by the Spicy Minorcan Pork and the Chicken Club, which are tied for second place. I decided on the Spicy Minorcan Pork in the "whole" size. Let me tell you now, the "whole" is massive. It's like a foot and a half long, no lie. So you better be really hungry or splitting it with someone else! I only ate half of mine (which is unheard of!) and it was really really good. The pork was sliced meat, not lunch meat. It reminded me of the pork from Puerto Rico, which is a big compliment. The datil pepper sauce gave the sandwich a nice kick and cleared out my sinuses pretty good. The sauce had sort of a mustard flavor but was spicy. I usually don't like mustard, but this sauce was very good. 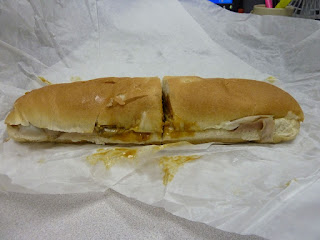 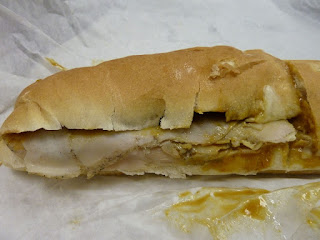 I went back today and tried the Chicken Club. Again, the meat was high quality and not lunch meat. The bacon was thinly sliced and crispy (how I like it) and the sandwich had ranch dressing (ranch makes everything better!) I think I liked this one better than the pork! All of the flavors went well together and it made me wish I got the massive "whole" size instead of the "half" even though I would have made myself sick eating all of that! 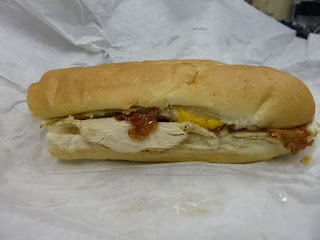 If you make it a combo, you can get some Otis Spunkmeyer cookies! YUM! 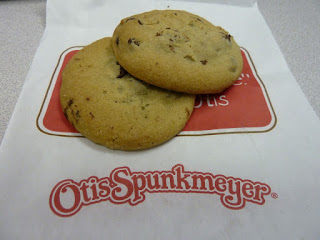 If you are in the area, give Ancient City a try. It is a great value for the money and the subs are different than the other sub places in town. I have a new favorite place and I can see many more trips there in my future!