Corner Taco got their food truck up and running this week, so you know I had to go check it out. One thing I love about Corner Taco is their awesome silver bean Airstream trailer! I have been following them on Facebook, so I know that this has been in the works for a while. I am glad to see that they are finally up and running! They were in my area on Wednesday, so I gathered up the hubby and somehow convinced my friend/coworker Karen, who is not shy about voicing her concerns about eating "anything out of the back of a truck", to give it a shot. Even with a long line, they took time to speak to me and I found out that they make their own tortillas! They told me that they set up at 9am that morning to make them. That's dedication!You can actually see the machine in the background (behind the woman) of the picture below. Karen told me that they remind her of the ones she had in Texas, and that is a HUGE compliment!
BTW, I took a candid shot and Ivan is in the picture! You can also see Karen in the reflection under the Corner Taco sign. I am conveniently blocked by the door :) 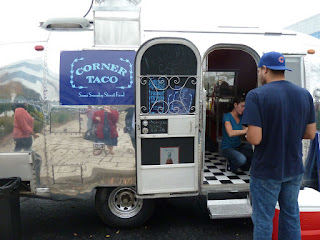 I ordered 3 tacos - Marinated Chicken, Mayport Shrimp, and Mahi-Mahi. All tacos come topped with shredded red cabbage, cilantro, and sweet chili + lemon sauce. First off, let me tell you that the sauce was ridiculous good! Next time I might ask for extra :) My favorite taco was the Mahi-Mahi. There was a large piece of fish in the taco and it went well with the sauce and red cabbage. I also really liked the Mayport Shrimp taco, but my shrimp kept falling out! That was more user error than a design flaw. I also liked the Marinated Chicken, but it was my least favorite of the 3.
The one thing that made the tacos absolutely mouthwatering delicious was....the tortillas!! You can tell that they are made fresh and they literally melt in your mouth. I have never had a tortilla like that and it is a nice change from the average, store bought variety that everyone else uses.
(In the picture from left to right - Mahi-Mahi, Shrimp, Carnitas) 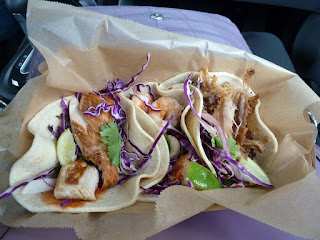 Ivan also got 3 tacos - Carnitas (2) and  Mayport Shrimp. Initally he was going to get 2 tacos and a Mexican Coke, but he let his hungry eyes take over and traded the Coke for another taco! He said that the Carnita tacos were really good. The meat was tender and had a lot of flavor, like pulled pork. I really wanted to try it, but I didn't act fast enough. While I was still trying to take pictures and eat my first one, he was finishing them up! I know better than to wait, but the excitement of a new place clouded my brain.
(In the picture from left to right - Carnitas, Shrimp, Chicken) 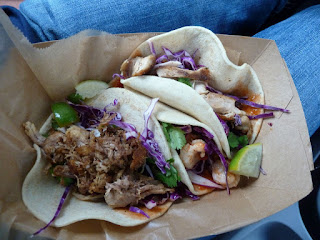 The verdict - Loved it! The food was fresh and the ingredients were top quality. The only negative is the prices, which are a little high. I wish the prices were a little lower, but I can still see myself visiting regularly. If they are ever in your area, stop by and check them out!