If you have never tried Papa Murphy's Take N' Bake Pizza, you are missing out! My boss introduced me to Papa Murphy's when we were working in Orange Park. At the time, that was the only location. But in the last few years, they have expanded to Mandarin and the Intracoastal area. Papa Murphy's is a new concept for our area. When you place your order, they make the pizza but do not cook it (hence the take n' bake). You take the pizza home and cook it yourself, which is great for us because we buy them before holidays to cook when all the restaurants are closed!
We got 2 large pizzas, one Pepperoni and one Cheese. The pizza comes in a cooking tray. It is a little weird at first because I thought the thing would burn up, but it doesn't! We cook the pizza in the tray, but my boss told me his trick. He gets the thin crust pizza and cooks it in the tray until the last 4-5 minutes. By taking it out of the tray at the end, it gives it a hard cracker type of crust. I am going to have to try that!
I am going to post some before and after pictures, but keep in mind that we like our pizza well done, so they are a little darker than usual. 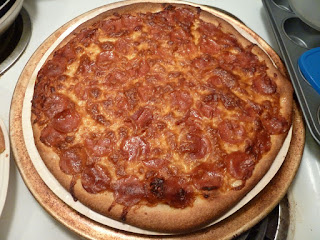 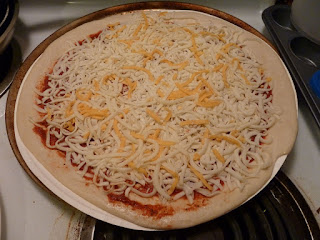 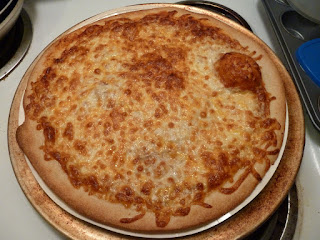 The verdict-Papa Murphy's is great for when you want a pizza but don't feel like paying too much and want great value. They are always running specials and coupons so it's not unusual to get a large pizza for $6. Also, (by mistake) we have found out that the pizza's freeze well. You are supposed to eat the pizza within 24 hours, but we had ours in the freezer for a week (uncooked) and it still tasted great! The only thing I would suggest is to put some wax paper in between the pizza dough and the cooking tray before you freeze it (remove it before you cook the pizza). When we cooked ours the pizza stuck to the tray a little. But that was our fault and the wax paper should fix that.