I have been dying to try Safe Harbor Seafood Market and Restaurant for a while, but we can never get out there when they are open. Last weekend I had an opportunity (Ivan was off on Saturday), so we finally got to check it out! We got there around noon and the place was packed. It's not your typical restaurant in so many ways. The main way is, it is also a seafood market. When you walk in the door, the first thing you see is fish counters. There are counters running the length of the restaurant with all kinds of different fresh fish. I also found out that Safe Harbor supplies a lot of the local seafood restaurants in town. I thought that was pretty cool. 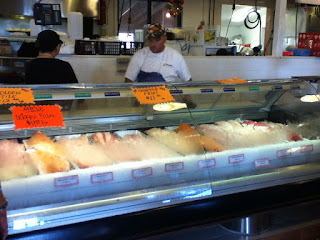 Another difference is the way you order. You order at the counter, get a number and sit down, and they bring the food out to you. By the time we got there, the line was already to the door but it moved pretty fast. One of the neat things about Safe Harbor is that you can see right into the kitchen from the counter. The workers are back there preparing the restaurant food as well as preparing the fresh fish for the market. I absolutely love it when you can see in the kitchen. It is one of my favorite things :) 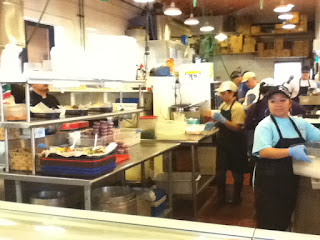 We ordered our food and took a seat outside. Our food didn't take that long to come out, but we were enjoying the nice weather and the lovely view, so we wouldn't have minded if it did.
For an appetizer we got the Fried Mushrooms. Ivan doesn't like mushrooms, so these were all mine! The mushrooms were breaded, fried, and served with a side of dressing (we think it was thousand island dressing). The mushrooms were nicely cooked and juicy while the breading gave it a nice crunch. I didn't think I could, but I ate the whole thing!! 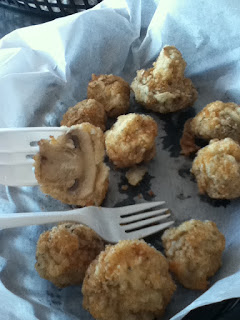 For my meal, I got the Combo Basket with Crab Cake and Scallops (grilled). It came with cole slaw, fries, and hush puppies. The crab cake was rather large and was so tender that it nearly fell apart when I ran my fork through it. There were lots of crab in there and not a lot of filler. I got the scallops grilled and they were delicious. After a few bad scallop meals recently (see previous blog posts here and here), I was really excited to get some good ones! There were only 4 scallops in the basket, but they were big and I wasn't left feeling like I needed more. They were cooked perfectly and were so soft that I was able to cut them with my fork. I usually like to dip scallops in ranch (what don't I like to dip in ranch??), but these were really good with just the butter that was melted on top.
The fries were of the average crinkle variety, but still tasted good. They were crisp and hot and far from soggy (like some other places that shall remain nameless.) The hushpuppies were also a winner. There were 2 in the basket and I ate both. It was a feat after eating everything else, but I managed to do it! 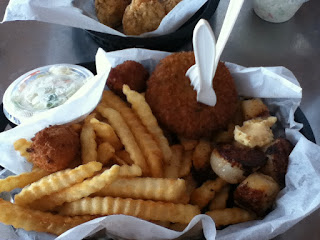 Ivan also got the Combo Basket, but got Crab Cake and Shrimp (fried). His basket also came with cole slaw, fries, and hush puppies. Ivan's description of the shrimp is that they were plump, tender, and perfectly breaded. He was also impressed with the crab cake and proceeded to eat in silence while he devoured everything! Seriously, I sometimes forget he is there :) 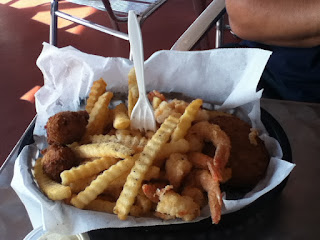 The verdict-Loved it! We thought the prices were great and the food was spectacular. The view from outside is beautiful and if you buy something from the market, they even have a fish cleaning station outside for you to use! The pelicans have figured this out and have taken up residence by the dock. 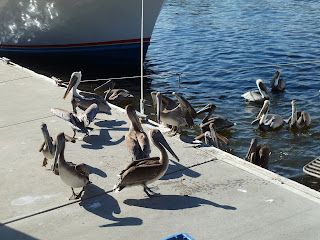 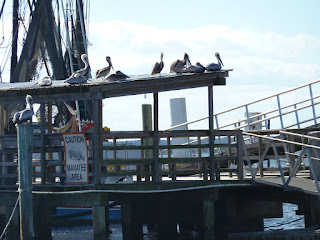 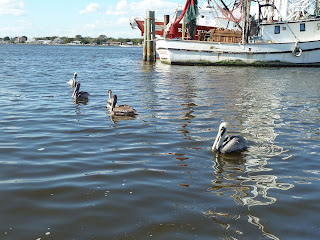 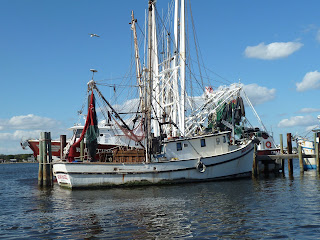