Lola’s Burrito Joint recently opened in the Riverside area. One of the owners is also an owner of Carmine’s Pie House, so I was eager to try it. I usually give new restaurants a few months to work the kinks out, but somehow we found ourselves there on opening week! We got there right when they opened, so we didn’t have any trouble getting a seat. I started to look around and noticed that the décor is awesome! The restaurant has a skull/skeleton theme and a huge motorcycle hanging from the ceiling! The walls are brick (which I LOVE!) and the place has a very open feel with all of the windows on the front. 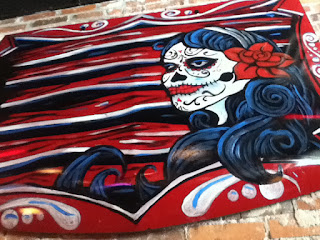 The menu is very diverse and doesn’t have your typical taco and burrito options. Everything has inventive combinations of ingredients and a funny name (some of them straddle that racist line, like Wetback Willy). I decided on 2 tacos, the Spicy Shrimp (shrimp, shredded cabbage, salsa, mojo lime aioli, cheese)  and Carnitas (fried pork, salsa, cheese, cilantro, shredded cabbage, and Chooie's Chimmy sauce). They don’t have corn shells, so all of the tacos are soft tacos (fine by me). The tacos were loaded with ingredients and had sauce across the top that reminded me of ranch (yummmm). The tacos were very good, but the only thing I didn’t like was the salsa. It is a very chunky salsa and was like eating straight tomatoes and onions, which are 2 of my least favorite things. 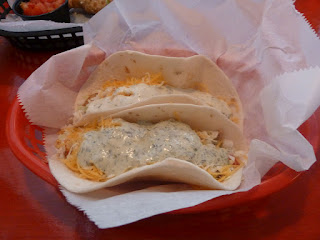 Ivan got the Dirty Sanchez burrito (deep fried soft shell crab, chorizo dirty rice, queso blend, black beans, diced fresh tomatoes, shredded cabbage, chipotle tartar. He was very pleased when it came out because the burrito was pretty big. At first he was wondering where the crab was, but he found it about 2/3 of the way down the burrito. He wishes that the crab was evenly distributed throughout the burrito, but he still enjoyed it. 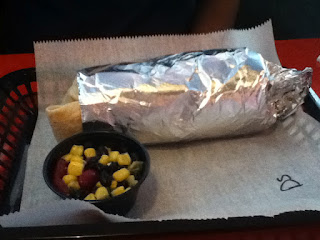 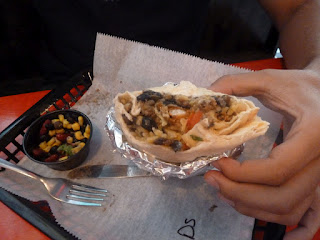 We also ordered empanadas to try them out. I am a little harsh on empanadas in general because my girls Yara and Sheena make some awesome ones (if you want some, let me know and I will hook you up with their contact info J). I got the Curry Chicken and Ivan got the Chorizo. We both thought they were really good. Mine was oozing with cheese and was still hot after eating the tacos. They are served with salsa, but they are really good on their own. 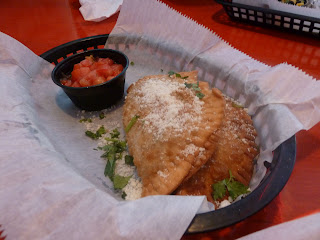 Verdict – Liked it. The food was great and the prices were reasonable. The food took a little while to come out, but with it being opening week, I’m sure they are still trying to get into a rhythm so it wasn’t an issue. The wait staff was very attentive and one of the owners came by the table to talk to us, so I thought that was nice.