Top 10 things you need to know before visiting Cuba

While planning our trip to Cuba, it was a little difficult to gather information. Either the info was outdated or I had to visit multiple sites to confirm that the answer was correct. Due to this, I wanted to create a blog post with all of the info I was searching for, and share that with y’all! So here goes...

In the last 6 months the US FINALLY got direct flights! You can shop around but we flew Jetblue from Orlando to Havana. The flight was super cheap and the (required) health insurance was included in the ticket. The Visa however, was not. I was a little worried about this because I couldn’t find a lot of info about the visa process and how to obtain one. I’m here to tell you how it’s done. When we got to the Orlando airport, we were directed to the International ticketing line, which was actually dedicated to Cuba. We walked up to counter and were asked for our passports. We were then given 2 forms to fill out. One was the Visa application and the other was the healthcare application. We paid for the Visa right there, and were handed the document. That’s it! We were on our way!

US issued credit/debit cards WILL NOT WORK. You cannot purchase things with them and ATMs will not work for you. I can’t stress that enough. Cuba is a cash island so don’t expect to use anything else while there. Figure up how much money you will need per day and bring enough cash with you. *I will list a general budget at the bottom of this article to give you an idea about how we figured our expenses.
There are 2 different currencies in Cuba, the Cuban Peso (CUP) and the Cuban Convertible Peso (CUC, pronounced Kook). You can only exchange money while in Cuba as it is illegal to possess their currency outside of the island. There are 2 money exchange kiosks located at the airport, and there are Cadecas (banks) located throughout the island.
All tourist money is exchanged for CUCs, which are valued at the same rate as the US Dollar. However, when exchanging US Dollars for CUCs, please note that Cuba charges a 10% penalty and a 3% currency exchange fee. This penalty is only charged on US Dollars.
CUPs are the local currency and are valued around 24 CUP to one US Dollar. Most tourists will have no need to use CUPs as these are mainly for small market items, street vendors, and public transportation.

Cuba is a Spanish speaking island with very few people that speak English. Many of the tour guides and restaurant employees speak basic English, but don’t expect it wherever you go. In my experiences, the majority of people spoke only Spanish. Luckily I had my husband/interpreter with me so I got along just fine.

While Cuba does have a few very nice hotels, you really aren’t getting the true Cuban experience if you aren’t staying at a Casa Particular (kind of like a B&B). The government allows some residents to rent out their rooms for tourists, and this is where you will want to be. We stayed at Casa Maura in Old Havana. Maura was a very lovely woman and was very accommodating. She lived in the unit next door with her family and would come over to see how we were doing and if we were enjoying ourselves. She gave us recommendations on things to do and where to eat and talked with us about our lives.  One of the best things about Cuba is their people, so to be able to stay with a local family and live the way they live, it’s an experience not to be missed.

Cuba does not have stores like we do, so bring everything you need from home. This includes toiletries, snacks, and toilet paper. While Cuba is not known for having parasites in the water, the pipes are very old and the water can upset your stomach. With that being said, I would still take every precaution to drink clean water. We bought some Lifestraws to bring with us just in case. I came home with a little bit of stomach trouble but it was easily treated with antibiotics. Sometimes no matter how hard you try, you are still gonna get it!

Before we left, we heard very mixed things about Cuba’s food. Some websites said that the food was terrible, while others claimed that the food was great (if you knew where to look). Well I looked and looked and I’m here to tell you that there is good food in Cuba, but you really have to hunt for it.
For a long time private restaurants were not allowed to operate in Cuba since the government provided all of the meals. These meals consisted of very bland food using low quality ingredients. Within the past few years the rules have been relaxed to allow residents to operate restaurants.
As much as I try to stay away from touristy areas/places, you almost have to go there while in Havana. The majority of the family owned restaurants are nearly impossible to find as they do not have any signage. Plus, walking around is also tricky due to missing street signs. So even if you know where you are going, it might be hard to find it. Another issue is that it’s difficult to distinguish between government run places and local run places (when there is no signage). If you are willing to roll the dice, you might come out a winner, but we just weren’t brave enough.
Your best bet is to download the Havana City Guide through the Trip Advisor app to search for restaurants. You don’t have to download it to use the app, but it is a good idea since Wi-Fi is not guaranteed (more on that later). We searched for restaurants in the area and were able to read reviews. We came across a few winners and you can never go wrong with $2 Mojitos everywhere you look!

Cuba’s internet is controlled by the government. For this reason, there are Wi-Fi spots around the city, but you have to pay to use it. They don’t necessarily advertise where the Wi-Fi is located, but in my experiences, I have found it in/around all of the hotels in Havana. There are no signs or directions, so you really just need to start asking around to find it. Once you do, you will buy a card that gets you online for one hour. The prices can vary but they are around $4.50 an hour. I have heard that the connection can be spotty, but I did not have any issues connecting or with the speed while using my social media apps.
Our phones (T-Mobile) would not work for text messages, but I was able to get calls out ok. Make sure to check with your cell provider before you go. Many cell phones will not work in Cuba, and if they do, prepare to pay out the nose in fees. Your best bet is to turn your roaming/cell data off, and find that Wi-Fi!
TIP ~ You can download WhatsApp to use your phone free over the WiFi network.

First thing first, Cuba is SMOGGY! We noticed the second we stepped foot out of the airport. With all of the old cars driving around it shouldn’t have been a surprise, but it was. If you have any kind of breathing trouble or asthma, be sure to bring your inhaler. Sometimes while driving around in one of the taxis with the windows down, it can get a little intense.
Now, with that out of the way, let’s talk about the old cars! Cuba is well known for having tons of old American cars. I read a few blogs before we left and they said that there really aren’t that many old cars in Cuba, but that is a lie. They are literally everywhere. However, I would assume that the bulk of these cars are located in Havana since many of the ones we saw were being used as taxis. And speaking of which, it is very easy to find a taxi. There are rows and rows of cars along every major road with their drivers soliciting patrons. You can also get a ride in one of the coconut taxis, which are the cutest things ever!

With Cuba becoming a big vacation destination, there are already tours available on the island. I think the best way to find these is by using Trip Advisor. That’s what we did and it was very helpful. We decided on 2 private tours while we were there. The first one was a walking/driving (in a classic car!) photo tour of Havana/Old Havana and the second was one that I was extremely excited about, a tour of Vinales. Cuba is well known for their cigars, so I was not passing up the chance to tour the tobacco farms and see how they are made.
I go into more details about the tours on my blog HERE

Don’t think about leaving Cuba without some cigars and rum…you will regret it! Besides the fact that they are crazy cheap, you can’t get these things outside of Cuba so grab some to take home. The limits on the amount of items you can bring to the US used to be $100, but President Obama got rid of that in October of 2016, so now you can bring whatever you want as long as it is for your personal use. The best thing to do is purchase your rum at the airport. They have a duty free shop near the terminal where you can buy your goods. They bag your liquor in clear plastic bags that you can take with you on the plane.
Please note that if you purchase rum outside of the airport, you can bring it home with you but ONLY in your checked luggage. The same liquid rules apply as the states and you will not be able to stick it in your carryon luggage. Trust me on this. I got too excited upon seeing a bottle of $5 rum that I purchased a few in Havana. Once I realized my error I asked around in different liquor/cigar shops but no one knew about the plane requirements. No one I asked has actually been to the airport. Let that sink in for a minute.

I can honestly say that Cuba has been one of my favorite vacation spots ever. The island is beautiful, full of history, and the people are very kind and friendly. There is virtually zero crime or drugs, and I felt safe 100% of the time while walking around during the day or night. You will be amazed with how well everything has been preserved, even though a lot of the  city is crumbling. If you are on the fence about going, you really should go now before things change. With the US now being able to visit, the island is already experiencing change. While we were there we noticed a lot of construction going on, and we were told all of it was new. Cuba is a beautiful island gem and you really want to experience it before anything changes.
Make sure you talk to the locals while you are there. They take such pride in their island and they enjoy talking to tourists and asking questions. Also, don't think about leaving your camera at home. The island is a true gem. 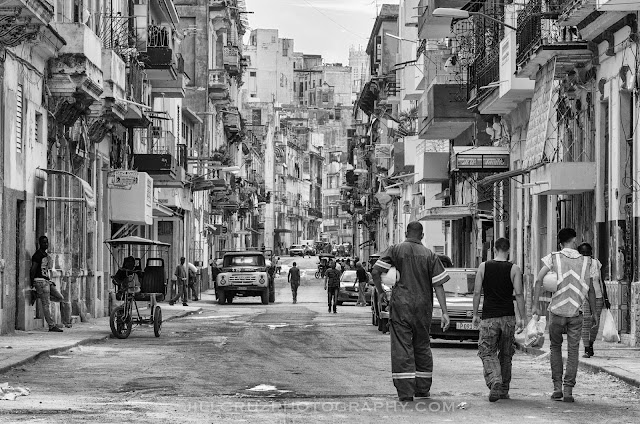