Today our adventures took us to Palm Valley Fish Camp in Ponte Vedra Beach. This was out first visit and will definitely not be our last. The restaurant is right on the water and every seat has a spectacular view. While they have a set menu, they also have specials for different days of the week. Here are the specials for today (Sunday) written on an old door: 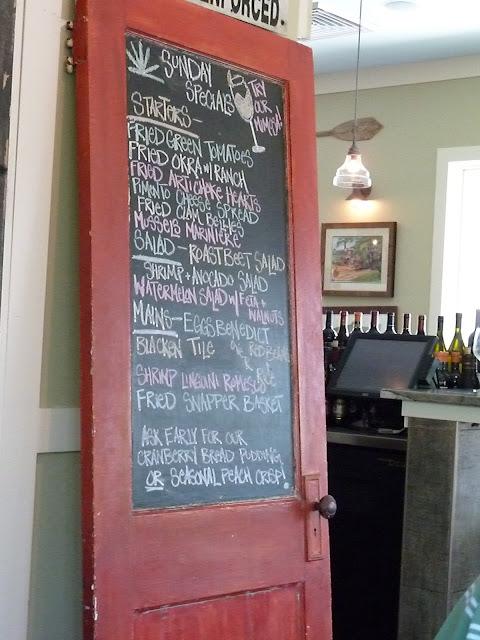 Somehow I missed the upper right corner where the mimosa was offered. I was kicking myself when another table got one because that thing looked good! Oh well, something to look forward to next time!


For our appetizer we got the Fried Clams with Fish Camp Tartar Sauce. The clams were lightly breaded and very fresh. They were the best ones we have ever had. They were not gummy or chewy at all and they melted in your mouth. The Fish Camp Tartar Sauce was creamy but not too thick. We also got ranch with it because I am a ranch addict! This was a great appetizer and it really made us look forward to the entree. 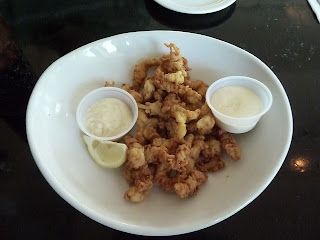 I ordered the Mayport Shrimp and Creamy Grits for my meal. I thought the presentation was lovely and I knew that I was in for a treat. The grits were as creamy as advertised and the shrimp were huge! I had to cut the shrimp in half and they were still a mouthful. The grits were topped with a chopped veggie medley that was mostly comprised of onions and peppers. Personally, I would have liked it if they left that part off. But I am a self proclaimed veggie hater so you can't blame me. 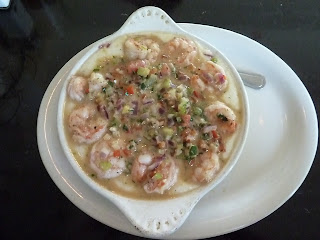 My husband decided on one of the lunch baskets that included fried shrimp and fried scallops. Initially, I was deciding between the shrimp and grits and the lunch basket. So when I saw how good his looked, I had a serious case of meal envy! The shrimp and scallops were lightly breaded and the fries were reminiscent of KFC's potato wedges (but were way better!)The meal came with two hushpuppies that were really light and had a taste that was not overpowering. It also came with some coleslaw, but my husband pretended that it did not exist. 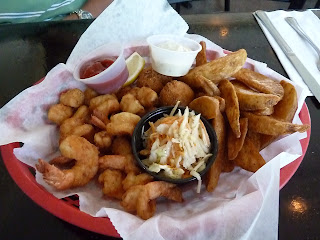 We had a great meal at Palm Valley Fish Camp and we are both sure that we will be back sooner than later. While the prices are on the higher end, it is definitely worth it!