For lunch today, my friend Karen and I decided to go to Cruisers Grill in Tinseltown. This was our first visit there as this is a newly opened restaurant. I read all of the online reviews and figured out that everyone likes their burgers. Well I was not in the mood for a burger today so I went with another recommended item, the Chicken Chunks. Even though the name is kind of gross, I decided to go ahead and give it a shot. They give you three options on the menu - marinated, fried, or spicy fried. I went with the marinated since they were grilled. When my entree came out it looked a little small. But halfway through, I realized that the amount was just right. The chicken was moist and tender and had a hint of sweet citrus flavor (thanks Karen for the last part of that description.) I got a side of ranch ($.59 extra) with my meal because I am a ranch fanatic...and boy was this ranch good! It was nice and creamy, just like I like it :) Well worth the extra $$. 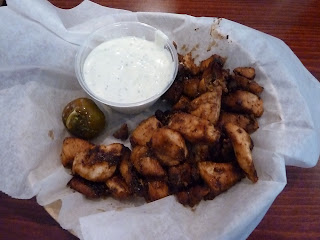 We also ordered a large plate of fries. With this being out first time there, we had no idea how many fries that would be and ended up leaving a lot on the plate (very sad.) Next time, I am sure we will get the regular portion and split it. The fries were nicely seasoned on the top, but the fries toward the center and bottom were lacking seasoning. That was fine with me because they were getting smothered in ranch anyway! 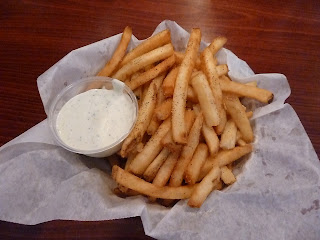 Karen ended up getting the Chicken Quesadilla, which was good for me because I was deciding between that and the Chicken Chunks. Inside the quesadilla was just marinated chicken and cheese and it came with a side of salsa, jalapenos, lettuce, and sour cream. She also was jonesing for some guacamole so she added some for $.95 extra. The quesadilla was huge! She was really hungry so she grabbed a corner of it before I could snap a picture, so use your imagination for that part! 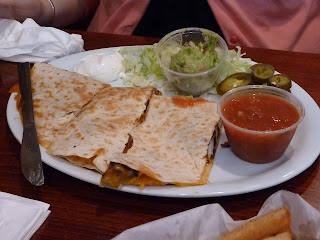 Overall we really liked Cruisers. One thing that struck me as odd is that the entrees do not come with any sides. So if you want fries, you have to add a few dollars to your bill. While this does not alter the final total too much, it is a bit off-putting since this information is not listed on the menu. You just have to figure it out yourself. The majority of the entrees are around $6.50, so when you add the fries it equals out to about the same amount you would pay somewhere else for the same type of meal.
Also, they do trivia there on Thursday nights, so I might have to swing by there and check it out!